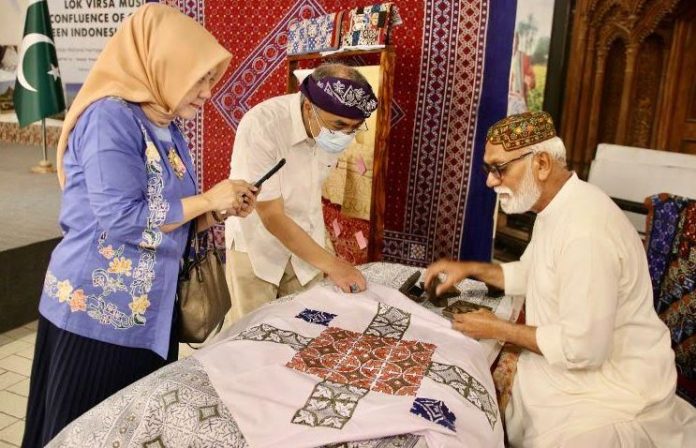 According to Lok Virsa management, around 7,286 people visited the Museum from 21 – 24 July 2022 to enjoy the cultural exhibition with their families and children

ISLAMABAD: The Embassy of the Republic of Indonesia in collaboration with Lok Virsaorganized a four- day successful photo-exhibition titled “A Night at Lok Virsa Museum: The Confluence of Civilizations between Indonesia and Pakistan,” which drew a largenumber of crowd from all walks of life.

According to Lok Virsa management, around 7,286 people visited the Museum from 21 – 24 July 2022 to enjoy the cultural exhibition with their families and children. The photo exhibition emphasized on historical connections, religious backgrounds, and aimed at strengthening cultural ties between the two Muslim brotherly countries Indonesia and Pakistan.

Visitors were entertained by the live demonstrations at the Batik and Ajrak stalls.  Women and children participated in drawing Batik designs on a white piece of cloth with a batik tool called “Canting” and hot wax. Ajrak stall also received a lot of appreciationfrom visitors for live stamping and making creative designs of Pakistani traditional art.

The exhibition also featured a 3D model of the Borobudur temple. People were eager to learn more about the history of the Borobudur temple, and its reconstructing process that took 75 years to complete. Such displayinspired visitorswho expressed their optimism that Pakistan has potential to attract many tourists around the world to visit remnants of the Gandhara Civilization.The Embassy of the Republic of Indonesia intends to take this exhibition to various cities in Pakistan in the near future to promote cultural ties and strengthen brotherhood between the two countries.-