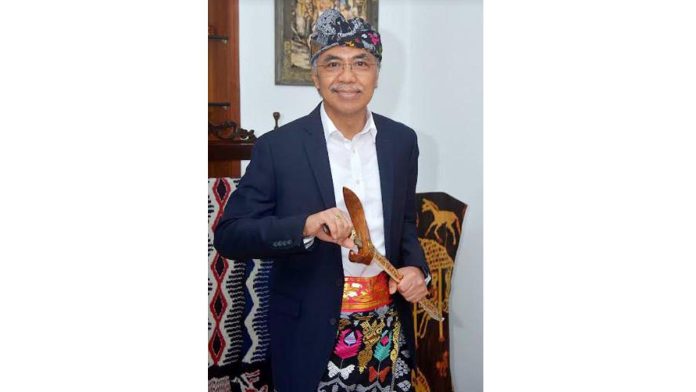 Indonesia and Pakistan share also remarkable similarities in their values, beliefs, food habits, and other aspects of social and daily life

ISLAMABAD: Ambassador of Indonesia Adam Tugio has said the early resumption of Palm Oil supplies to Pakistan after phone conversation between President Joko Widodo and Prime Minister Shehbaz Sharif truly reflects the spirit of cooperation and sound development of our growing bilateral ties.President Joko Widodo ordered immediate supply of 10 containers of palm oil and to initiate process for the shipment of one million tons of palm oil to Pakistan. The decision also shows Indonesia’s commitment to maintain sustained global supply of palm oil and this gesture of goodwill will surely provide renewed impetus to the trade and economic cooperation between the two countries.

He expressed these views while giving an Interview to Daily Islamabad POST. The interview coincides with the Independence Day celebrations of Indonesia.

The ambassador further said, Indonesia had to impose temporarily ban exports of palm oil on late April due to the scarcity of cooking oil in our domestic market.  It was an irony that as the biggest producer of palm oil, people in Indonesia could not findedible oil in the market. The ban was lifted in May 23, 2022.

As a trusted friend, Indonesia paid prior attention to the visit of Pakistani delegation led by Minister for Industries & Production Makhdoom Syed Murtaza Mahmud to Jakarta from 12-14 June 2022 on the special instruction of PM Shehbaz Sharif. Prompt facilitation was extended by Indonesia in response to Pakistan’s request for the earliest possible palm oil shipments after the meeting of Pakistani minister with his Indonesian counterparts. Indonesian Ministers also assured that Pakistan would be the first country to which the commodity will be exported after the promulgation of new export regulations. Ten ships loaded with 140,000 Metric tons of edible oil have arrived in Pakistan during June and July, following phone conversation between our two leaders’.

The top leadership of both Indonesia and Pakistan fully realize the importance of continued communication and dialogue and committed to remain actively engaged on issues of mutual interest at bilateral and multilateral levels. Here, I would specifically like to mention recent bilateral consultations held at the political level. The 3rd Round of Policy Planning Dialogueand Bilateral Consultation Forum were held on 24-25 May 2022 in Bali.

During these talks both the sides reviewed the growth of Pakistan-Indonesia ties over the last 72 years, agreed to strengthen relations with a more structural approach. To this end, our two Foreign Ministers will meet on regular basis for taking stock the progress and providing strategic directions to further elevatetwo-way relations. Simultaneously, this forum serves also as a platform for bilateral consultation to address global issuesof shared concern.

He added, our two leaders also seized the momentum of Eid Adha Mubarak to express their commitment to strengthening bilateral relations by exchange the invitations for official visits. President Joko Widodo and PM Shahbaz Sharif further agreed that as the two largest Islamic countries, Pakistan and Indonesia should continue to work closely on issues of concern to the Ummah. The recent engagements between the leadership of the two countries have been a manifestation and reaffirmation of the two countries cordial and exemplary long-standing diplomatic relations.

While talking about religious and cultural relations the ambassador said, building of cultural bridge and expansion of academic linkages are important areas for greater understanding and cohesion between our two brotherly countries. We, therefore, need to enhance connectivity in the fields of cultural exchanges, people-to-people contacts, cooperation in education, science and technology, and even sports. Networking between academia, think tanks and intellectuals has been Embassy’s focus because of its great potentialfor fostering a sense of relationship based on mutual trust, respect and understanding of each other’s traditions and values.

With this contextual perspective, the Embassy in collaboration with the University of Peshawar organized an Online Internship Program (OIP) on “Contemporary Dynamics of Indonesia”. The main objective is to promote better understanding about modern Indonesia, its challenges and achievements during transformations of Indonesian society, and Indonesia’s growing political and economic integration in the region through ASEAN.The OIP was the second year in a row and the Embassy wishes to continue this program next year.Besides, the Embassy is keenly working to establish “Indonesian Corners” at number of leading Pakistani universities starting with the University of Peshawar.

The Corner will offer Indonesian language courses, cultural festivals and other activities of common interests that would be helpful in enhancing useful cultural linkages at large.I am confident that continued close collaboration and facilitation will improve networking at various levels and will surely contribute in strengthening bonds of friendship between our countries.

He said, Indonesia and Pakistan share also remarkable similarities in their values, beliefs, food habits, and other aspects of social and daily life. I am of the view that these similarities are the potent manifestation of the historical, religious and cultural relationship between the two societies since time immemorial.

To highlight this relationship, the Embassy in collaboration with Lok Virsa Museum, Islamabad recently organized an exhibition titled “A Night At LokVirsa Museum: The Confluence of Civilizations Between Indonesia and Pakistan”, featuring selected collection of photographs and videos on cross-cultural influence on both countries. I am encouraged by positive message we received from visitors and audience about the Exhibition – despite geographically distant apart our two nations are close in the hearts.

To a question about Independence Day the ambassador said, in recent years, Indonesia has been transformed politically, diplomatically and economically. These three key areas form parts of ournational identity: things that define Indonesia’s place at global arena, the relevance of Indonesia’s independent and active foreign policy and its contributions in the world community.As a founder member of Non-Aligned Movement (NAM), Bandung Spirit is the guiding principle of Indonesia’s independent and active foreign policy with a strong belief in multilateralism to resolve global issue amicably.

As Indonesia celebrates its 77th Independence Day this year, the world sees Indonesia as the third biggest democratic country in the world where Islam and modernity go hand in hand, the biggest economy in Southeast Asia, a successful country in its transformation and country that practices freedom, pluralism and tolerance.

Indonesia is committed to deepening and broadening cooperation with the international community and continues to be at the forefront in promoting the role of the United Nations in creating a more secure and peaceful world order. Moreover, as a member of ASEAN, G-20, APEC, ASEM, D-8, NAM, G-77 and OIC, Indonesia always strives for the promotion of international cooperation for global peace and prosperity.

At present, Indonesia also holds the Presidency of G-20, that demonstratesits fast-growing capacity to provide leadership and represents the voices of developing nations. The 17thG20 Summit will be held in Bali on 15-16 November 2022.

The three main pillars of Indonesia’s G20 Presidency are: Global Health Architecture, Sustainable Energy Transition and Digital Transformation which will allow taking lead on equitable access to Covid-19 vaccines and inclusive economic development.The above indicators reflect that Indonesia enjoys a respectable place among the comity of nation with its policies of good neighborliness and peaceful coexistence around the globe.