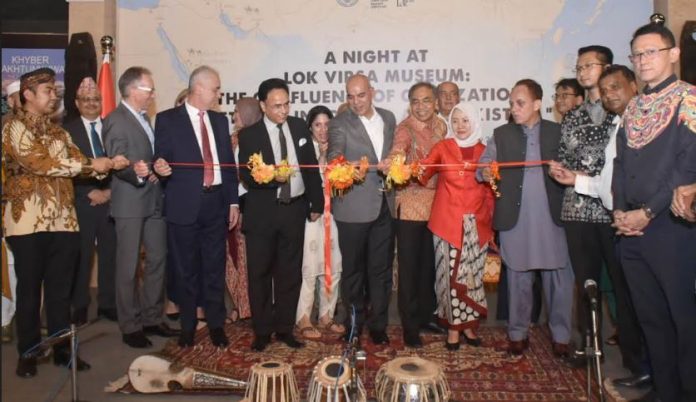 ISLAMABAD: Ambassador of Indonesia Adam Tugio along with member of the diplomatic community and the management of the Lok Virsa, inaugurated the grand cultural exhibition featuring unique and historical pictures depicting difference stages of the Indonesian history. The exhibition will continue for five days and will open for the general public from July 21 to 24.

Ambassador Adam Tugio in his opening remarks highlighted significance of the event. He especially made mention of the Indonesian students studying in Pakistani Universities who contributed greatly towards the success of the landmark exhibition.

The ambassador said, ‘A Night at Lok Virsa Museum’ intends to feature the fusion of Indonesia-Pakistan’s cultural history and artworks through a selected collection of photographs and videos, shedding light on the inter-regional connectivity and cross-cultural influence during the course of history of respective countries. The Exhibition aims to offer fresh perspectives into historical connections, religious backgrounds, and the confluence of civilization of both countries from past to present’, he added.

Ambassador Tugio further said, the Exhibition will highlight the religious-cultural influence and similarities between the two countries during their journey of civilization through the display of art works.

He said, similar to Pakistan, Indonesia has also a huge impact on the study of palaeontology. The island of Java has produced some of the most diverse vertebrates and fossils in numerous discoveries. And in Flores archaeological evidence of prehistoric life has been discovered. Experts like Prof. Verhoeven and Prof. Dubuis predicted that the artefacts were created around 750.000 years ago based on a number of stone tools connected to a stegodon fossil (now-extinct elephant).

Ambassador Tugio hoped that the exhibition will help Pakistanis and even foreigners living in Pakistan to better understand the cultural potential that exists between the two countries besides having firsthand information about hitherto unexplored facets of the Indonesian cultural heritage.

The Ambassador hoped that more and more people would flock to the exhibition. It may be mentioned here that a Batik display corner was also established on the sidelines of the exhibition. Visitors evinced interest the traditional Indonesia dresses.