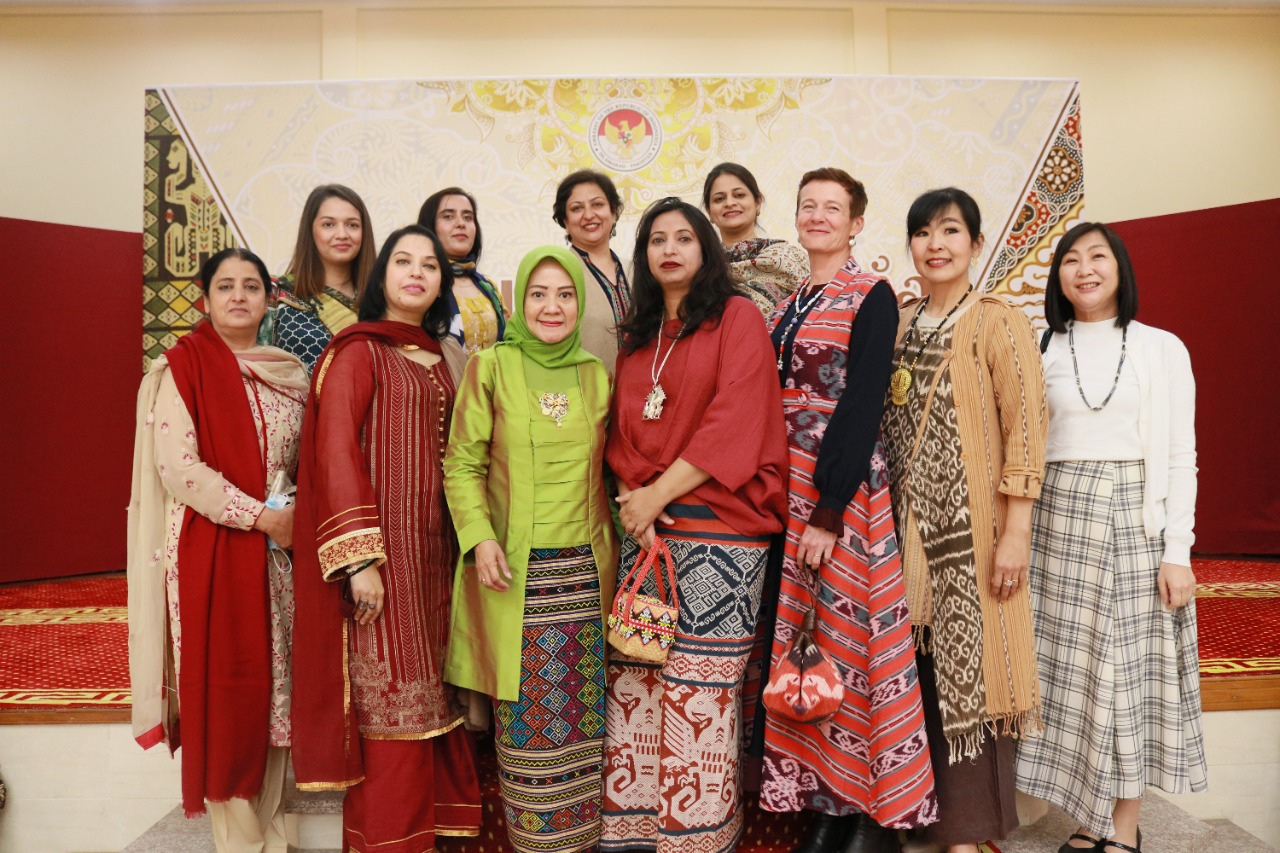 ISLAMABAD: The spouse of the Indonesian Ambassador Mrs. Irina Tugiohosted Wastra Indonesia featuring Fashion Show to Celebrate the Value of Cultural Heritage and Diversity during the coffee morning at the Indonesian Embassyon November 18, 2021.

The event showcased batik and weaving products to the invited guests most of whom were wives of heads of foreign representatives, international organizations and the President of Pakistan Foreign Office Women’s Association (PFOWA),Ms. MehwishSohail who is also the wife of the Foreign Secretary of the Ministry of Foreign Affairs of Pakistan.

Mrs. IrinaTugio welcomed the guest at the Indonesian Embassy. She introduced the concept of Wastra Indonesia to the guest.MrsIrianaTugio highlighted the importance ofWastraas it is a special product because the majority of its makers are women who work as Small and Medium Enterprises. She said the Wastra is also an ancestral heritage that is an Indonesian cultural asset and has a vital social role in various parts of Indonesia because each Wastra has its own uniqueness and story.

Coffee Morning brought the guests an opportunity to understand and get the exposure of Indonesia’s diverse culture and its philosophical, and historical values through its most famous Indonesian textile which is called “Batik”.Batik has been recognized by UNESCO as a world cultural heritage.

The exhibition also featured a mesmerizing fashion show and the models displaying wide range of batik dresses drew great applause from the audience considering that the models were the wives of the ambassadors who enthusiastically participated in exhibiting batik on the ramp and in many cases exhibited their own collection of batik. The wives of the Ambassadors who performed as models at the fashion show included Madam ZhannaAssanova from Kazakhstan, Madam Irena (Czech), Madam Reema (Bangladesh), Madam Henriette (Netherlands), Madam PornratKrachaiwong (Thailand) besides Indonesian models, Miyra Mathilda and Yanti Budi.

The participants appreciated the host Mrs. IrianaTugio for her great effort in promoting cultural ties and giving them an opportunity to be a part of the beautiful cultural event, which is truly enjoyable and learning experience for them.The performance activities were also continued with the promotion of Indonesian culinary offerings Indonesian delicacies such as satay, meatballs, peanut crackers, traditional snacks, cakes among others. This exciting and lively fashion show which involved the wives of the ambassadors was the first of its kind in the capital.

The wife of the Czech Ambassador Ms. Irena said, “This is the first time we have this kind of fashion show I have attended and we should arrange such events on regularly basis.”

“All is so beautiful,” said Ms. Rema, the wife of the Bangladesh Ambassador when observing clothes at the fashion show. “I would love to buy these clothes,” she added.

The event was concluded with a note of thanks and Mrs. IrianaTugio extended herheartfelt gratitude to the honorable guests who attended the event and invited them to visit the wonderful Asia- Indonesia.