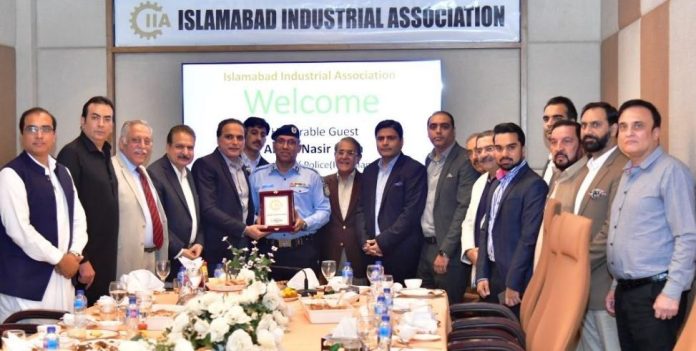 Sector I -9 Dry Port Road is closed every day due to parking of large vehicles on the road, suitable measures should be taken to keep the traffic flow in running: Zikria Akbar Zia.

President Islamabad Industrial Association Zikaria Akbar Zia has explaned the IG Police that due to the parking of trailers and big vehicles on the road on I -9 Dry Port Road, the road is closed every day and the citizens and visitors have to wait for hours. This issue should be resolved immediately. ICCI President Ahsan Zafar Bakhtawari said that police patrolling in industrial areas and markets should be increased to make the capital a crime-free city. ICCI will fully cooperate with the police.

and Islamabad Chamber ready to  provide motorcycles to police for better surveillance/ petrolling and Market and industry. Former President of Islamabad Industrial Association Mian Akram Farid have told to IG Islamabad Police that any measures taken by the police for the improvement of the industrial area should be continued permanently.

Therefore, Islamabad police should take steps to remedy this immediately. And in the police stations of industrial area, the maintenance committees should be formed and every room within the police station should be allocated for the committee, ex. Vice President FPCCI Karim Aziz Malik said that check dis In the case of FIR registration takes a lot of time, so the FI of check dishonor should be registered immediately. There is a lot of problem.

And Afghans from Rawalpindi come to the vegetable market and its adjacent areas and commit various crimes in the vegetable market and industrial area and go to Rawalpindi. Actions should be taken to remedy them. G. Islamabad Police Akbar Nasir Khan while addressing the business community at the office of Islamabad Industrial Association said that cameras installed in commercial areas and industrial areas will be linked to the Safe City project to ensure maximum vigilance in the city.

can be made The installation of new cameras will increase the coverage of important locations and help improve the law and order situation in the city.

He said that this initiative will improve the security of the city. All markets and commercial areas should try to install security cameras that will be linked to the Safe City project to ensure better surveillance of business areas.

Regarding the rising crime situation, he said, “In the society. Intolerance is one of the reasons for the increase in crime and better education is necessary to improve tolerance in society which will reduce crime. Former presidents of ICCI Sheikh Tariq Sadiq, Mian Shaukat Masood, Nasir Khan, Mohsin Khalid, Sheikh Atif Ikram, Council Member Founder Group Chaudhry Waheed- ud Din and other seniors present in the meeting.