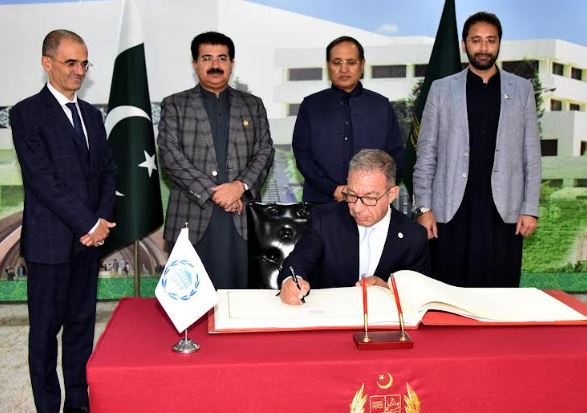 ISLAMABAD, SEP 11 /DNA/ – Chairman Senate Muhammad Sadiq Sanjrani Welcomed the Inter-Parliamentary Union President Duarte Pacheco at the Parliament House. IPU President is on his visit to Pakistan to express solidarity with Parliament, Government and People of Pakistan especially the flood affectees of Pakistan.

Chairman Senate called upon President IPU to use his good offices in order to garner support and appeal to all the member countries to come forward for Pakistan’s assistance.

The Chairman said that the floods caused tragic losses, and left millions homeless,  and shelterless, he also informed that crops worth millions were destroyed and the entire
infrastructure damaged.
After immediate relief work the complete rehabilitation of the flood affectees will be the main challenge” he added “huge funds will be required for the rehabilitation of the affectees”. He proposed that the IPU President should make contact with the IPU member countries, donors and other institutions in this regard so that the relief and rehabilitation works can be accelerated.

In the meeting, discussions were held on making the Inter-Parliamentary Union more dynamic and increasing institutional cooperation. Chairman Senate Muhammad Sadiq Sanjrani said that Pakistan is determined to promote peace, democracy, human rights, gender equality and sustainable development as per the mission of IPU.  Pakistan has high expectations from IPU and IPU has to play its role for resolution of Kashmir and Palestine issue.

Sanjrani said that the effects of climate change in Pakistan are severe and the recent floods are unprecedented in human history. People, civil societies and institutions are coming forward to contribute in the relief work.

Chairman Senate said that we are grateful to the international community, but there is a need to speed up the relief work and Pakistan will continue to play its role for the promotion and development of peace at the global level.

Chairman senate also hosted a dinner in the honor of visiting delegate. Addresssing the gathering, both the leaders expressed their resolve to further boost institutional cooperation. Chairman Senste highlighted the importance of institutional cooperation at a time when Pakistan is bearing the brunt of Climate Change and its affects. IPU President assured his all out cooperation to generate much needed support for Pakistan in this hour of need.