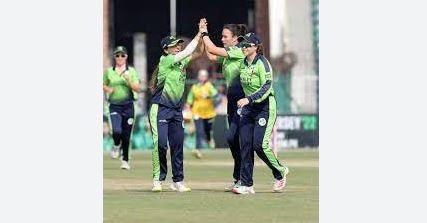 Today’s game also added significance as the Pakistan Cricket Board as part of its social corporate responsibility supported the Pink Ribbon campaign to create awareness about breast cancer. In that regard, both team captains, players, match officials and commentators had wear pink ribbons during the course of the match and awareness messages was displayed inside the stadium.

Coming into the match with series level at 1-1, Ireland’s captain Laura Delany made no hesitation to bat first after winning the toss and the opening batters made full use of the batting track and put a 110-run partnership for the first wicket. Amy Hunter was the first one to go back to the hut, scoring 35-ball 40, hitting three fours.

Right-handed batter Gaby Lewis was next to go not before top-scoring for her side with a 46-ball 71, smashing 11 fours and one six. Orla Prendergast – who was declared the best player in the first T20I contributed a quick-fire 23-ball 37, which included three fours and one six. The tourists went on to score 167 for four in 20 overs.

Chasing 168 to win, only three Pakistan batters managed to score into double figures and the side were all out for 133 in the 19th over. Right-handed opening batter Javeria Khan top-scored for her side, scoring 50 off 37, laced with seven fours. The experienced all-rounder Nida Dar was other run getter for her side, scoring a 24-ball 26, which included one four and a six.

Fatima Sana, down the order smashed two boundaries in her 10-ball 14. For Ireland, captain Delany and Arlene Kelly grabbed three wickets apiece, while Jane Maguire took two wickets for 26. Lewis for her match winning innings was declared player of the match.

Pakistan in their next assignment will now take on Australia in Australia for three ODIs – part of ICC Women’s Championship and three T20Is in January next year before featuring in the ICC Women’s T20 World Cup in February in South Africa.