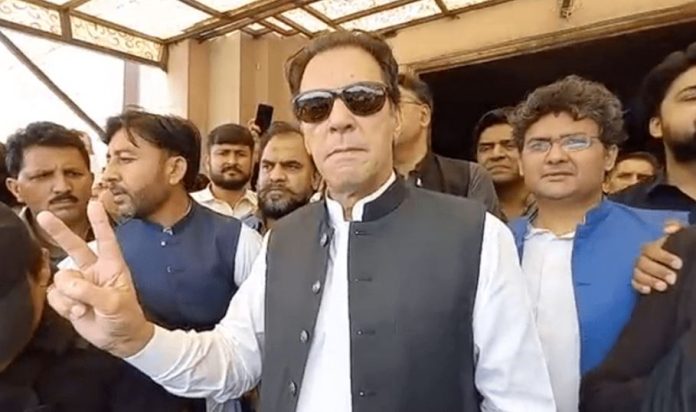 Islamabad: An Islamabad anti-terrorism court (ATC) on Monday extended the interim pre-arrest bail of PTI chief and former prime minister Imran Khan till September 20 in connection with the terrorism case registered against him.

The PTI chairman arrived in court amid tight security with his vehicle blanketed in rose petals. Imran remain tight-lipped as he made his way inside. However, he once again told the reporters that he was “very dangerous”.

The PTI chief was booked for terrorism under Section 7 of the Anti-Terrorism Act for making controversial remarks against Additional Sessional Judge Zeba Chaudhry and officials of the Islamabad Police during a rally in Islamabad on Aug 20.

Another case was also registered against the former premier for violating Section 144. However, new sections were later added to the FIR, against which the PTI chief had approached the court.

At the previous hearing, the special prosecutor had confirmed the insertion of the sections and admitted that these sections were not inserted in the FIR initially.

These sections were: Section 504 (intentional insult with intent to provoke breach of peace), 506 (punishment for criminal intimidation), 186 (imprisonment for three months), and 188 (disobedience to an order lawfully promulgated by a public servant).

Meanwhile on Sunday, Imran for a third time refused to appear before the joint investigation team (JIT) probing the terrorism charge against him.

During today’s hearing, presided over by ATC Judge Raja Jawad Abbas Hassan, prosecutor Raja Rizwan Abbasi informed the court that the PTI chairman had not yet joined the investigation.

The prosecutor pointed out that three notices had been issued to Imran, all of which had gone unanswered.

However, Imran’s lawyer Babar Awan said that the prosecution had been informed that Imran’s statement was with the investigating officer (IO).

“Where is it written that visiting a police station is a prerequisite for [joining the] investigation?” he asked. He also questioned whether Section 161 (examination of witnesses by police) of the Code of Criminal Procedure (CrPC) required a suspect to make an appearance at a police station for the investigation process.

Awan said that Imran’s statement was written down but it was never made part of the investigation. “If the court orders, Imran will go to the police station and join the investigation,” he said, adding that he had also offered to let the PTI chief record his statement before the court.

He went on to say that the case was a “mere two lines” while the rest of the matter had gone to the Islamabad High Court.

“This will happen when you gather all the crooks in Islamabad,” he said in an apparent reference to the government. Awan also pointed out that the court could issue a show-cause notice to the IO for conducting a faulty investigation.

He also lambasted the government for allegedly disrupting YouTube services in the country in an attempt to curtail coverage of Imran’s rallies.

In his arguments, prosecutor Abbasi said that the discussion at hand was about the suspect joining the investigation. He said that the JIT or the IO would determine the best method of doing so.

“Is it necessary to physically join the investigation?” the judge asked. The prosecutor replied that this was at the discretion of the IO.

The judge directed the prosecution and Imran’s lawyer to decide where and when to become a part of the investigation and then extended Imran’s bail till September 20.