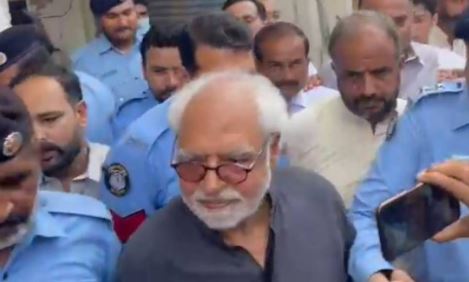 ISLAMABAD, SEP 25 (DNA) — A local court granted one days’ physical remand of senior journalist Ayaz Amir, in the murder case of his daughter-in-law Sara Inam. His daughter-in-law was allegedly killed by his son in Islamabad’s Chak Shehzad suburb on Friday.

The 37-year-old was living at a farmhouse in the area where she was found dead, reportedly murdered with a dumbbell. Police produced Ayaz Amir before the court of civil judge and pleaded for his four days’ physical remand.

“I informed police of the murder myself and requested the SHO, SP and the IG Police on phone to reach on the crime scene”, Ayaz Amir said. “I told the IG and SHO to act as per the law if it is mistake of my son,” he said.

“It is a norm in our country, someone commits crime, while another grabbed in it,” Ayaz Amir said. “I was in Bhagwal, a village of Chakwal, 100 kilometers away from Islamabad at the time of crime,” he added.

Police told the court, “it is a high-profile crime” and demanded remand of Ayaz Amir. Defence lawyer said that his client was not named in the FIR and there was no evidence against him.

Police told the court that Ayaz Amir had informed the police about the murder incident. The capital police arrested Ayaz Amir after district and sessions court Islamabad issued arrest warrants for the father and mother of the accused.