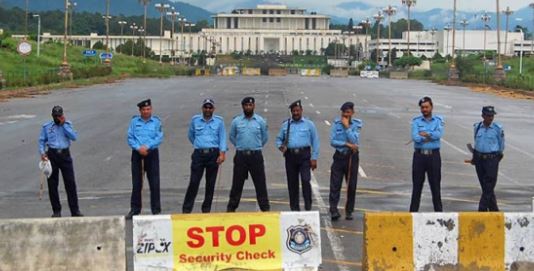 ISLAMABAD, SEP 21 (DNA) — Islamabad police said Wednesday that security of the Red Zone had been enhanced, by deploying extra police contingents at its exit and entry points and also placing containers at some points, to deal with any disruption to law and order.

The spokesperson for Islamabad police said that some people had turned to the federal capital from Punjab for the fulfillment of their political demands due to which the security of the Red Zone had been enhanced with the deployment of extra police contingents at its entry and exit points.

“Those going to offices and educational institutions in the Red Zone are advised to leave for their destinations before time to avoid any difficulty,” he said, adding that a traffic plan would also be released soon for the smooth flow of traffic.

“Islamabad police are always ready to deal with any disruption to law and order. Citizens are requested to cooperate with the police. Section 144 is imposed in the city. The violators will be dealt with according to the law,” he warned.

Former interior minister Sheikh Rashid Ahmed took a jibe at his successor Rana Sanaullah, saying that he wanted to turn Islamabad into the battlefield of Panipat. Sheikh Rashid further said that hundreds of containers along with large police contingents numbering 30,000 have arrived and on hold for Imran Khan’s call in Islamabad.

Talking about Rana Sanaullah’s statement about Imran Khan, Sheikh Rashid referred to him as Ranjeet Singh saying that his thoughts and actions will turn Islamabad into the battleground of Panipat.

The Kilometer government will be responsible for building a fence of all the provinces around itself, said the Awami Muslim League chairman. He further said that the nation’s decision evident, and the opposition should go home once the elections are done.

Sheikh Rashid further criticized the Pakistan Democratic Movement and the opposition saying that they are trying to escape the elections whereas election is the only solution for national economic and political stability. The petrol prices were also increased last night by Rs1.50, they value of Rupee is decreasing daily and the fuel, electricity and food prices are increasing daily. =DNA