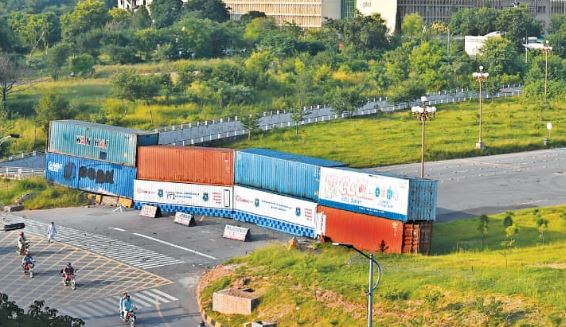 ISLAMABAD, Oct 29 (DNA): Fearing that thousands of participants of the Pakistan Tehreek-e-Insaf’s (PTI) long march could go deep into Islamabad, the federal government on Saturday extended the federal capital’s Red Zone to the Zero Point.

Under the new arrangement, Faisal Avenue, Margallah Road, Barri Imam and Fifth Avenue were all made part of the Red Zone.

“Section 144 will remain imposed in the areas declared a part of the Red Zone. “Any rally, public meeting or congregation will not be allowed in the extended area of the red zone.”

Political temperature soaring in the country as Islamabad has been on high alert after the Pakistan Tehreek-e-Insaf’s (PTI) call to long march.

The government has decided to deploy thousands of security men to block PTI’s supporters from entering in the federal capital.

According to officials, the interior ministry has decided not to allow protesters to enter the red-zone area, housing the key federal government offices including the Parliament and other state institutions.

The cabinet body headed by Interior Minister Rana Sanaullah comprises of 13 members. The committee has been constituted to maintain law and order and hold political dialogue.

PTI’s long march, which had started from Lahore’s Liberty Chowk yesterday (Friday, October 28, 2022) to press the government for early elections, could not cover much distance on the first day as thousands of party workers and supporters joined it, retarding its speed considerably.