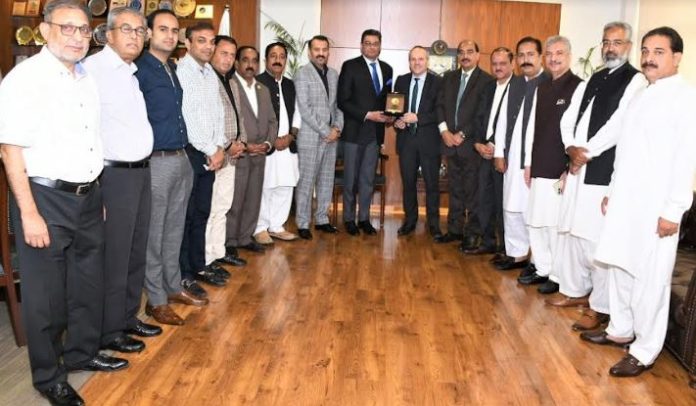 Islamabad, SEP 13 /DNA/ – Roberto Neccia, Deputy Head of Mission, Embassy of the Republic of Italy said that the bilateral trade of €1.5 billion between Italy and Pakistan was much below the actual potential of both countries and both should work for improving their two way trade to at least €5-6 billion per annum as they have the potential to achieve this target. He said this while addressing the business community during his visit to Islamabad Chamber of Commerce & Industry.

Dr. Roberto Neccia said that a trade section was being opened in the Italian Embassy and hoped that it would give a jump to bilateral ties between the two countries. He said that the Iran-Italy Chamber of Commerce and Industry contributed positively for trade and floated the idea of a Pakistan-Italy Chamber of Commerce & Industry to strengthen networking and business linkages between the private sectors of both countries. He said that Italy has 5 million family owned SMEs and close cooperation between the SMEs two countries would be helpful in sharing experiences and promoting bilateral business relations. He lauded the contribution of the Pakistani community in Italy and said that they could act as a bridge for improving trade ties. He said that Italy would support Pakistan for renewal of the EU’s GSP plus concession. He said that Pakistan should send sector-specific trade missions to Italy to explore untapped areas of mutual cooperation and assured that his embassy would provide all possible facilitation to the Pakistani business community in promoting business relations with Italy.

Speaking at the occasion, Muhammad Shakeel Munir, President, Islamabad Chamber of Commerce & Industry said that Pakistan considers Italy an important country for trade and economic relations as both countries have good potential to cooperate with each other in many areas. He said that Italy has advanced technology & machinery, therefore, close cooperation with Italy is beneficial for Pakistan to improve its economy. He said that Pakistan has a lot of reserves of marble & granite and import of latest marble machinery from Italy can help us to produce value-added marble products and increase their exports. He said that Pakistan can import industrial & agricultural machinery from Italy while Italy can import many products from Pakistan including raw materials, textiles, surgical instruments, marble products, pharmaceuticals, leather products, sports goods and more. He stressed that both countries should encourage regular exchange of trade delegations to explore all potential areas of bilateral trade promotion.

Jamshaid Akhtar Sheikh Senior Vice President and Muhammad Faheem Khan Vice President ICCI said that ICCI is planning a trade delegation for Italy and hoped that it would help in exploring new areas of business collaborations with Italian counterparts.