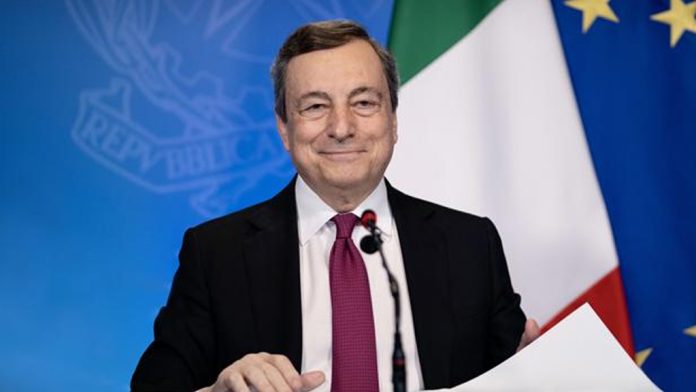 Rome: Italy’s Prime Minister Prime Minister Mario Draghi said Wednesday the only way out of a political crisis threatening the country’s stability was a new government pact based on “courage, selflessness, credibility”.

The premier threw the onus on parties across the political spectrum to put aside differences and join together as it had in February 2021 when Draghi took the helm of a newly formed unity government to address Italy’s myriad challenges from coronavirus to the economy.

“The only way forward if we want to stay together is to rebuild afresh this (government) pact with courage, selflessness, credibility,” Draghi told the Senate.

“Are you ready? … You don’t owe this answer to me, but to all Italians”.

The stern speech by a usually softly-spoken Draghi suggested that the former leader of the European Central Bank was prepared to stay — but on one condition: if the wildly disparate parties pledge anew to a common agenda.

The crisis was sparked by the refusal by the Five Star Movement, a coalition member, to opt out of a confidence vote.

Parliamentarians will now debate for over five hours, setting out their positions. Draghi will then respond, before a vote later Wednesday.

There is much at stake: a government collapse could worsen social ills in a period of rampant inflation, delay the budget, threaten EU post-pandemic recovery funds and send jittery markets into a tailspin.

Polls suggest most Italians want Draghi, 74, to stay at the helm of the eurozone’s third-largest economy until the scheduled general election in May next year.

Draghi noted Wednesday that as an unelected leader he needs the broadest consensus possible to tackle Italy’s most pressing issues: from a cost of living crisis and recession worries, to the rollout of key reforms and the Ukraine war.

For a long time, he said, his coalition was able “to put aside divisions and come together… for rapid and effective action, for the good of all citizens”.

But “the desire to move forward together gradually waned, and with it the ability to act effectively, with ‘timeliness’, in the interests of the country”.

Parties on the centre-left have said they will support Draghi, but a question mark remains over right-leaning Forza Italia and the League, which have ruled out staying in government with Five Star.

“We are in the middle of an Italian-style political crisis, so predictions change utterly from one second to the next,” Giovanni Orsina, head of the Luiss School of Government in Rome, told AFP.

Five Star head Giuseppe Conte has demanded Draghi adopt the Movement’s priorities, from a minimum wage to tax credits on energy-efficient home upgrades — something he is unlikely to do.

The populist party may split before the vote, with Forza Italia and the League potentially agreeing to work with the breakaway element.

Once the largest party in parliament, the Five Star Movement has already seen scores of defections as it hews to its radical, anti-establishment side in a bid to reverse plummeting support in the polls.

At least 15 more of its MPs were set to quit should Five Star vote against Draghi, news agency AGI said.

“A last-ditch compromise cannot be entirely ruled out,” Lorenzo Codogno, a former head economist at the Italian treasury, said in a note.