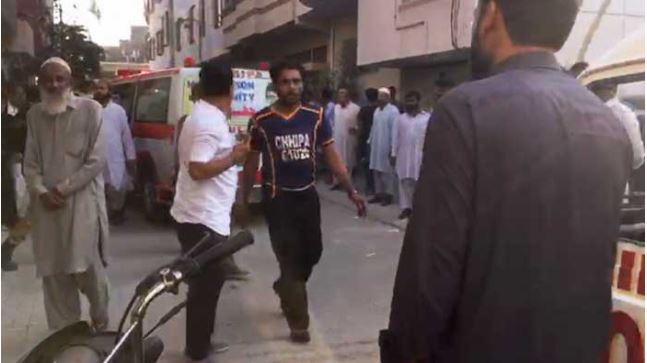 KARACHI: A man, likely in his forties, allegedly killed his wife and three daughters with a sharp-edged tool in Karachi’s Shamsi Society, before trying to unsuccessfully stab himself to death, police said Tuesday.

The suspect remains critically injured in a hospital.

All the dead and the injured belong to the same family, according to the Senior Superintendent of Police Sajid Sadozai, who added that the victims were tenants of the house where the crime was perpetrated.

The victims were killed with a sharp-edged tool, most probably a butcher’s knife. The survivor, a critically injured man, identified as Fawad, the husband of the older woman and father of the murdered girls.

According to police, Fawad, the father, is the prime suspect in the murders. SSP Sadozai said the dead woman was Fawad’s wife, while the girls were his daughters.

“The suspect, a sales manager at a private spice-selling company by profession, tried to commit suicide after killing his wife and daughters,” the police official said.

The SSP Korangi said the house was locked from the inside after the murders, “which indicates the suspect was behind the killings”.

Police have recovered a knife from the crime scene, as per SSP Korangi. The Crime Scene Unit has reached the murder site to collect evidence. The investigators are also recording statements from neighbours and other residents in the vicinity.

According to SSP Korangi, the incident is an internal matter of the family. He said that the suspect first killed his daughters and later his wife.

He added that the police had to break into the house to get to the bodies and the injured man. Sadozai further shared that while Fawad’s family lived on the first floor, his brother resided on the building’s second floor.

SSP Sadozai ruled out the possibility of someone coming into the house and murdering the victims as the family resided in a small portion of a house, which comprised two rooms and there was no entry point from the backside.

“After inspecting the house and given the circumstantial evidence, I am sure that Fawad has committed these murders,” the senior police officer told Geo News.

SSP Sadozai said that the suspect’s mother and sister-in-law — who live in the portion below them — broke the door and entered their rooms. “The mother told me that she believes that Fawad has committed [the murders].”

The police officer said the mother informed the authorities that the relations between the couple had never deteriorated to such an extent that he would murder his wife, albeit, they would often fight.

SSP Sadozai said it is possible that the victims might have been drugged before being killed as given the amount of blood in the house, they should have screamed for their lives — but they didn’t.

“The sister-in-law of Fawad has told police that she heard one scream of Fawad’s wife.” About the victims being drugged, he said that it can be confirmed once the forensic report comes in.

The police said they had yet not recorded Fawad’s statement as he was critical.

Speaking to Geo News, the suspect’s mother said that everything was fine until 1:30pm in the afternoon.

“The girls also went to school and college,” she said. The suspect’s mother added that she heard screams and called upstairs but no one picked up.

“When I went upstairs, the door did not open. When we shook the door hard, the hinge opened. After I went inside the girls were lying where would usually sleep. In the other room, my daughter-in-law was covered with a blanket,” she said sharing details of the incident.

Fawad’s mother added that her son and daughter-in-law had never complained about anything.

“Today, all my granddaughters met me and left for studies. When I went inside, my son Fawad was also lying injured,” the suspect mother informed.

“My son hadn’t received his salary for four months,” she added.