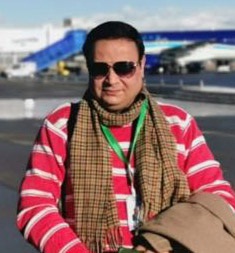 Despite hue and cry of corrupt elements of the society in the country, karma of National Accountability Bureau (NAB) is achieving skies in terms of new heights of recoveries from the different sectors of economy, production channels, departments and of course corrupt individuals since its inception.  Now NAB stands for total transparency, accountability, trust, efficiency and above all professionalism.

In Islam corruption is prohibited because corruption is the mother of all evils. It has multiplier socio-economic and geopolitical damaging and destructive effects in the country. Corruption is an anti-human and development act also. It has rigged system and weaker factions and sections of society are now on its mercy. Devils & Devis have been sitting on the peaks of mountains of corruption for so many years untouched, unnoticed, unanswered and unaccounted. For the first time through NAB numerous Devils & Devis have been caught red-handed and punished.

Unfortunately, our elite junta has been looting national treasuries with no mercy due to which common people, general health, schooling, clean drinking water, basic human rights and basic necessities of life has been compromised. But NAB has become ray of hope in the siege of darkness, injustice, malpractice, corruption, embezzlement, fudging of funds, decay of judicial system and above all untamed official discretions in the country.

It seems that now caravans of ultimate accountability, justice and recovery are on the right path under the supervision of NAB Chairman Justice (r) Javed Iqbal and prosecutor General Syed Asghar Haider.

Due to their tireless systematic organizational mechanism eradication of corruption has become the voice of the whole nation as it not only halts progress of the country but also usurps the rights of the deserving people. Pakistan is facing the challenge of corruption which is the root cause of all problems being endured by the country.

Corruption has a chain which acts like a termite. The National Accountability Bureau (NAB) was established in 1999 to cope with the menace of corruption. Besides bringing corrupt elements to justice, it was tasked with recovering the looted amount, and then either returning it to the affected or depositing it in the national exchequer.

Moreover, working on some 930 inquiries is still continuing nowadays. Some 4,201 investigations have so far been completed from out of 4,547 investigations approved. Working on 436 inquiries is still continuing. NAB has filed 3,645 corruption references since inception. Of which 2,398 references have been decided by relevant accountability courts. Right now 1,247 references are under trial in different accountability courts.

NAB Chairman Justice (r) Javed Iqbal has developed an excellent system of anti-corruption strategy. NAB during 2019, received a total of 53,643 complaints during 2019. Of which 42,760 were taken to logical conclusions.

Justice (r) Javed Iqbal has established a CIT system for improving internal performance mechanism and benefiting the experience of senior supervisory officers. A consultative committee has also been established for resolving business community issues. Business community has already thanked the chairman for taking vital measures to resolve their problems. Chairman has already directed NAB officers to deal visiting businessmen, politicians and others with respect and dignity as NAB is people friendly organisation and it does not believe in hurting anybody’s feelings. Moreover, NAB has established a forensic lab at Islamabad in which the facilities of analyzing digital forensic, documents and fingerprints are available. It helps saving time besides ensuring accuracy. NAB is the sitting chairman of SAARC anti-corruption forum. It is a significant achievement of the country. NAB is also a focal anti corruption institute according to the UN anti corruption convention, which is an honour for Pakistan.

The bureau has also signed a MoU with China in connection with anti corruption. This is aimed at cooperating and benefiting each other’s experiences for eradication of corruption.

Despite character assassination NAB officers have no affiliation with any group, individual or party but only with state of Pakistan. The performance of NAB under the leadership of Javed Iqbal and prosecutor General Syed Asghar Haider has been lauded by reputed World Economic Forum, Pildat, Transparency International, Mishaal Pakistan. According to Gallup survey 59 percent Pakistanis have expressed satisfaction over NAB’s performance.

Most recently, the NAB released its three-year performance report, showing a total recovery of Rs487 billion. The highest recovery and best performance was shown by the bureau’s office for Rawalpindi region.

Of the total Rs487bn, the Rawal­pindi NAB recovered Rs290bn, showing the best performance among all seven regional offices of the anti-graft watchdog during the last period under review. It was followed by Karachi, which managed to recover the plundered wealth of Rs93.17bn. Lahore NAB recovered Rs72.2bn, Sukkur Rs26.16bn, Multan Rs4.10bn, Balochistan Rs1.81bn and Khyber Pakhtun­khwa NAB Rs733.3 ­million. The total recovery of NAB, since its inception in 1999, is said to be Rs714bn.

NAB Chairman retired Justice Javed Iqbal said that one of NAB’s major achievements since its inception was the recovery of around Rs714bn directly and indirectly which was a remarkable achievement as compared to other anti-corruption organisations with an overall conviction ratio of 68.8 per cent.

Prime Minister (PM) Imran Khan has also appreciated performance and recoveries of the NAB told during 2019 and 2020 amounting to Rs389 billion in comparison to previous 10 years (2008-2018) recoveries. The premier said that anti-corruption department in Punjab has recovered Rs206 billion in 27 months in comparison to only Rs3 billion in the past 10 years under the corrupt rulers.

In any civilized society there is no scope for corruption. People of this country have been at the receiving end because of unstopped corruption and uncountable deeds of so-called dignified political figures and its cartels for the last sixty years. Somehow, they all remained untouchable and repeated undue compromises unfortunately, transformed them diva and deity. Now PTI government has showed some courage to trial the corrupt politicians. In this regard despite constant criticism on National Accountability Bureau (NAB) various cases of corruption and money laundering are being filed in the courts.

Pakistan has now entered into a defining moment. The tussle between state and corrupt political statutes, courts and conspiracies, law and loot, justice and jugglers and above all accountability and fugitiveness will come to its logical conclusion very soon because state is at stake and a series of political balderdash will achieve nothing but total catastrophe in which National Accountability Bureau karma will play a vital role.