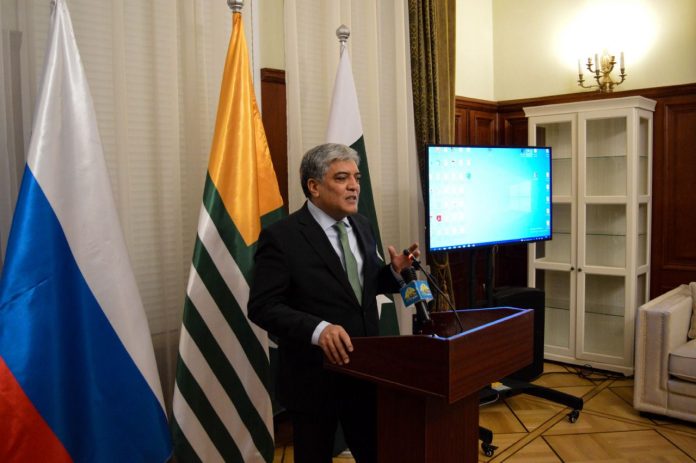 Kashmir Black Day observed at the Embassy of Pakistan in Moscow
Moscow: October 27, 2022
“Pakistan’s only objective is the fulfilment of the legitimate aspirations of our Kashmiri brethren,” said the Ambassador of Pakistan to Russia, H.E. Shafqat Ali Khan while addressing a gathering on the occasion of Kashmir Black Day at Pakistan Embassy Moscow premises today.
The event was organised by the Embassy of Pakistan in Russia in connection with the observance of 27th October as Kashmir Black Day by Pakistanis and Kashmiris across the world. The event was attended by Pakistani community members, Diplomatic officers and staff.
The Ambassador noted that the brave struggle of the Kashmiris for their right to self-determination has proven that India’s brutality and military might can never suppress the Kashmiris. He underscored that the people of Kashmir have already chosen their path, and Pakistan will continue to extend moral and political support to the indigenous Kashmiri struggle. Ambassador Shafqat Ali Khan expressed hope that the difficult days of Kashmiri people are numbered and light can be seen at the end of the long dark tunnel.
A documentary about the 75-year-long resistance to the Indian occupation and brutality in Jammu and Kashmir was screened on the occasion.
Messages by the President and the Prime Minister of Pakistan were read by Deputy Head of Mission, Rana Summar Javed and Second Secretary, Muhammad Tayyab respectively.
A photographic exhibition depicting atrocities of Indian occupation forces in the Illegally Occupied Jammu and Kashmir and the freedom struggle was also arranged on the occasion.