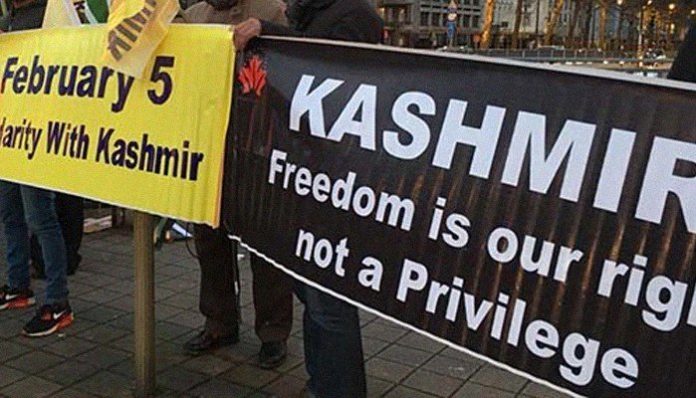 Pakistan’s Ambassador to Morocco organized an event at Pakistan’s Embassy in Rabat, to pay tribute to brave Kashmiris for their stand against the brutality of Indian forces.

Senior Moroccan officials participated in the event to pay their tribute and support the Kashmir cause.

Embassy in Abu Dhabi also organized the Kashmir Solidarity Day to show their support to their Brothers and Sisters facing Indian brutality. People who were at the event vowed to continue their support for Kashmir’s Right to Freedom.

A solemn ceremony was held at the Embassy of Pakistan, Minsk to commemorate the Kashmir Solidarity Day, which was attended by Pakistani diaspora, students and Belarusians from different walks of life.

Addressing the participants, Ambassador Sajjad Haider Khan reaffirmed Pakistan’s unwavering support for the people of Indian Illegally Occupied Jammu & Kashmir (IIOJK) in their just and legitimate struggle for the inalienable right of self-determination. While underscoring Pakistan’s commitment to seeking a peaceful resolution of the dispute in keeping with the aspirations of the people of Jammu & Kashmir and UNSC resolutions, he maintained that the resolution of this issue is the sole guarantor of lasting peace and stability in South Asia.

On the occasion, the Ambassador also brought to attention the recent spike in violence by the Indian Armed Forces in IIOJK and brutal human rights violations being carried out with absolute impunity. He further highlighted the systemic socioeconomic injustice against the valley’s Muslims and termed the ongoing Indian state sanctioned policy of ethnic cleansing as genocide in its worst manifestation.

On the occasion, documentaries depicting the woeful state of human rights in Kashmir, both in Urdu and Russian were also played.