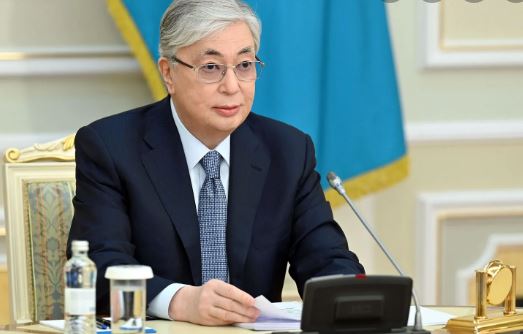 NurSultan, JAN 28: Kazakhstan’s president was on Friday voted chairman of the ruling party, replacing former head of state Nursultan Nazarbayev in the role, his office said, as he moves to cement control following a bloody national crisis.

“By the decision of the extraordinary XXI Party Congress, the President of the Republic of Kazakhstan, Kassym-Jomart (Tokayev), was unanimously elected Chairman of the Nur Otan Party,” his office said on Twitter.

Nazarbayev, 81, ruled ex-Soviet Kazakhstan for close to three decades before hand-picking Tokayev, 68, a career diplomat and then-loyalist, to replace him as president in 2019.

Nazarbayev last year announced his decision to hand the party leadership over to Tokayev — a move that seemed to confirm Tokayev would stand for another presidential term even if many thought his predecessor still pulled Kazakhstan’s political strings.

But in the aftermath of bloody unrest that left 225 people dead, Tokayev on January 11 questioned his former mentor’s legacy, in particular widening inequality between the elite and the poor in Central Asia’s richest country.

Tokayev said Nazarbayev’s rule had created “a layer of wealthy people, even by international standards” in the speech that all but confirmed rumours of a power struggle between the pair.

In the days that followed, Nazarbayev’s once-powerful relatives and in-laws were effectively jettisoned from top corporate and political posts.

Tokayev took over Nazarbayev’s most powerful position — chairmanship of the national security council — on January 5, a day when protests that began over a fuel price hike morphed into deadly clashes and looting.

Appearing for the first time since the crisis began on January 18, Nazarbayev denied any conflict with his successor, referring to himself as “a pensioner”.