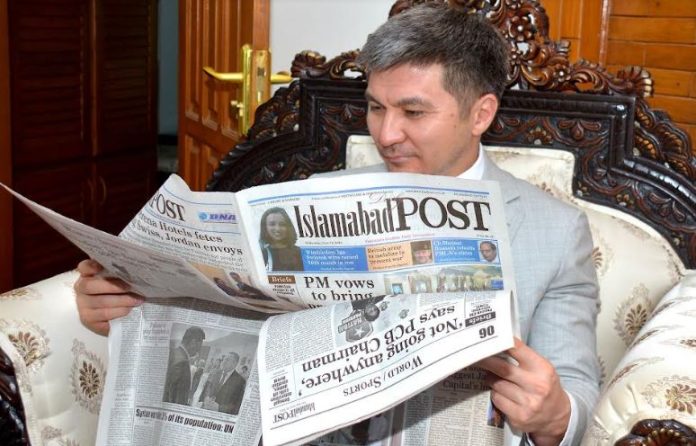 ISLAMABAD: Ambassador of Kazakhstan to Pakistan Yerzhan Kistafin has said the recently held referendum in Kazakhstan will change lives of the people of his country adding after the referendum people will now have more rights.

He expressed these views while giving an interview to daily Islamabad POST.

The ambassador further said, referendum on amendments and additions to the Constitution of our country was held in Kazakhstan on June 5 this year.  Already on the morning of June 6 this year, the Central Election Commission reported that according to the results of the referendum, the turnout of citizens who voted was 68.6%, of which more than 77% supported the introduction of 56 amendments to 33 articles of the Constitution of the Republic of Kazakhstan, and almost 19% opposed the changes, 1.5% of Kazakhstanis who voted accepted both answers, and 2.5% – spoiled their bulletins. Thus, the vote for amendments to the Basic Law was recognized as having taken place.

‘Taking into account the turnout rate at the referendum sites, we express confidence that the adopted amendments will change the life of the people for the better, since the constitutional reforms initiated by K.K. Tokayev proceed from the long-term request of citizens to expand their participation in state governance and the deep democratization of political processes’, he added.

Ambassador Kistafin further said, these processes are fundamental, since from now on the country’s political system adopts a new format of interaction between the state and society. This model of interaction consists in the fact that: First, the final transition from a super-presidential form of government to a presidential republic with an influential Parliament and an accountable Government took place.

Secondly, a majority-proportional system of electing deputies to the Majilis and Maslikhats – local representative bodies – has been introduced. This will make it possible to more clearly reflect the interests of voters both at the national and regional levels.

Thirdly, the President of the country will appoint akims of regions and cities of republican significance, taking into account the results of consideration of candidates in maslikhats. In other words, the people will have direct involvement in the appointment of the heads of regions.

Fourth, the President’s equidistant status from all political parties and movements is being consolidated. The President may not be a member of any political party during the period of his/her term of office. The public will be confident that the Head of State will not lobby for the interests of a particular group of people.

Fifth, the human rights functions of the State are being strengthened. In the “Second Republic”, the constitutional rights of citizens of our country will be respected, a new political culture based on mutual respect and trust between the state and society will be formed. And this is only a small part of the reforms that have been initiated, which will become an incentive for big changes in Kazakhstan’s society, he added.

To yet another question on the subject the ambassador said, an accountable Government is one of the conditions for new reforms. At the same time, a strong and operational executive power represented by a professional Cabinet of Ministers is the key to the qualitative implementation of the requests of the Kazakh society and the instructions of the Head of State. I would like to elaborate on the key political changes, the success of the implementation of which directly depends on the coordinated activities of the Government.

The first is the improvement of the administrative and territorial structure of the country. Progress directly depends on the prosperity of the regions: the principle of “strong regions – a strong country” remains an axiom of the ongoing reforms. Three additional regions were formed in Kazakhstan.

Administrative and territorial changes optimize the process of public administration, make it easier for citizens to move around the country, contribute to more effective regulation of internal migration, as well as the distribution of finances.

Taking into account the introduction of elective mayors, the Government is considering a mechanism for direct financing of local self-government bodies in accordance with international practice.

Third, the constant changes in the geopolitical and geo-economic realities associated with the conflict potential on a regional and global scale.

Accountability, efficiency, responsibility in decision-making and their execution in the conditions of turbulence of world processes, disruption of production and trade chains and other negative trends are designed to be among the main qualities of the current Government of Kazakhstan.

He added, the Government is obliged to act as a guarantor of the adoption of priority anti-crisis measures. Ensuring the food security of our country is also of great importance for the current Cabinet of Ministers.

‘In this regard, I would like to draw your attention to the unique idea of the Head of State to create an Operational Headquarters under the Government of Kazakhstan, which simultaneously performs the functions of a Situation Center. The Operational Headquarters analyzes information and the situation in the country and abroad in real time, as well as develops specific emergency measures’.

When asked to share some initiatives taken by the president for the welfare of the people, Ambassador Kistafin said, a number of political reforms above, so I will not repeat myself. I will try to focus on the basic ones. Already from the moment of his election to the post of President of the country, K.K.Tokayev began to audit the entire political system of Kazakhstan.  As a result, an understanding has matured of the need for deep socio-political transformations that:

– eliminate the bureaucratic gap between the government and the people,

– they will form a civil society with an active life position,

– strengthen the positions of non-governmental structures and, eventually,

– they will launch the process of democratization on a national scale.

It was for this purpose that the Concept of a “Hearing State” was first declared, designed to promptly and effectively respond to all constructive requests of Kazakhstanis, create conditions for a permanent dialogue between the authorities and society, and also build a harmonious state embedded in the context of modern geopolitics.

The support and strengthening of civil society, the demand for its involvement in the discussion of urgent national tasks caused the creation of the National Council of Public Trust in 2019, which has been working on a rotational principle for a long time.

Having existed for three years and fulfilled its tasks, this year the Council was transformed into the “National Kurultai”, which formed a single institutional model of public dialogue.

Thus, the Kurultai will present a wide range of very different opinions and views. Meetings of the authority will be held on a regular basis.

The current leadership pays great attention to the right of the public to freedom of speech and expression of will. The first step towards this was the improvement of the legislation on rallies and peaceful assemblies.

The well-being of the development of the entire Kazakh society should also be the strengthening of harmony between various social and ethnic groups. In particular, the authority of non-governmental organizations is increasing, work is being carried out in the field of language policy, a presidential decree in August 2020 adopted a concept for the development of civil society in the Republic of Kazakhstan until 2025.

Modernization of the party system of Kazakhstan plays an important role in political transformations.

But it should be noted that the modernization of the political system of Kazakhstan is not possible without optimizing the state apparatus. Starting from 2022, the leadership of Kazakhstan has begun to gradually reduce the number of civil servants, and the released funds were used to financially stimulate the most useful employees and employees of state structures.

It is expected that by 2024 the number of government employees and employees of national companies will be reduced by 25 percent.

This, of course, is not the whole list of activities that are carried out within the framework of K.K.Tokayev’s political reforms.

Separately, there are issues of economic diversification, development of small and medium-sized businesses, the fight against corruption, law enforcement reforms, etc.

The ambassador said, at the same time, it must be recognized that the main achievement of the reforms of the current President of Kazakhstan was the response from all Kazakhstanis who did not stay away from supporting his initiatives. And I am sure that the results of the referendum held on June 5 this year are the main guarantee of the effectiveness and success of further political transformations in Kazakhstan.