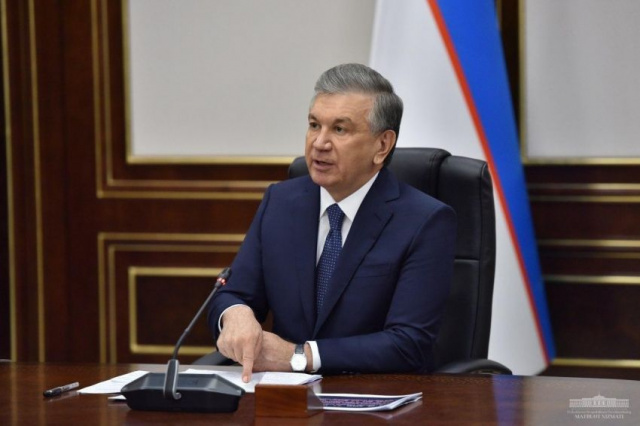 On June 9, President of the Republic of Uzbekistan Shavkat Mirziyoyev held a meeting to discuss pressing issues of ensuring the stability of the national economy.
The coronavirus pandemic is becoming a hardship for the whole world. The emerging global crisis has a serious impact on the economy of all countries. According to the World Bank forecast, in 2020 global GDP is expected to decline by 5.2 percent, the United States – by 6.1, Russia – by 6 percent, the European Union – by 9.1 percent. However, economic growth is anticipated at 1 percent in China and 1.5 percent in Uzbekistan.
Over the past three months, 2.3 trillion UZS of tax incentives were provided to economic sectors, 3.6 trillion UZS were allocated from the Anti-Crisis Fund.
At the meeting, the Head of the state noted the availability of all opportunities for ensuring further economic growth this year through the use of new approaches and tools, and outlined 8 key areas along this path.
So, the priority areas are identified:
the first is ensuring economic and financial stability;
the second is poverty reduction and employment growth;
the third is acceleration of banking system reforms;
the fourth is an increase in foreign direct investment;
the fifth is increasing the export potential and securing foreign exchange earnings;
the sixth is strengthening competitiveness in industry;
the seventh is development of small business;
the eighth is widespread introduction of digital technologies in all sectors.
During the discussion of the first direction of the action, it was entrusted to optimize budget revenues and expenses. Instruction was given to provide additional income by resuming the activities of enterprises and improving tax administration, and when entering into external loan transactions, not to allow exceeding the established limit.

Within the framework of the second direction, this year it is necessary to restore 810 thousand permanent jobs, create 310 thousand permanent and 633 thousand seasonal jobs.
In accordance with the resolution of the President “On measures to simplify state regulation of entrepreneurial activity and self-employment”, adopted yesterday, on June 8, the list of activities that self-employed people can engage in has been expanded from 24 to 67.
The Head of the state instructed, taking into account Chinese experience, to consolidate ministries and agencies for villages with a high level of poverty, to create a system of assistance for people in need, to develop a family business and a private household. It was proposed to send students to such areas, who studied at the expense of a state grant, for the implementation of labor activities for a period of 3 years.
Serious reforms have been launched in the banking system. The importance of accelerating the planned measures, timely implementation of the transformation process in ten banks with a state share, indexation of interest rates in accordance with anti-inflationary policy were emphasized at the meeting.
Deputy Prime Ministers were given instructions on attracting and mastering foreign direct investment.
Increasing exports and securing foreign exchange earnings are very relevant in a pandemic. A sharp decline in demand in foreign markets has a serious impact on domestic exporting enterprises.
In this regard, within the framework of the fifth priority area, the Ministry of Investments and Foreign Trade has been tasked with ensuring export performance no less than in 2019.
At the meeting, main attention was paid to industrial development issues. It was noted that in some sectors there is no integrated chain for deep processing of raw materials and production of value-added products.