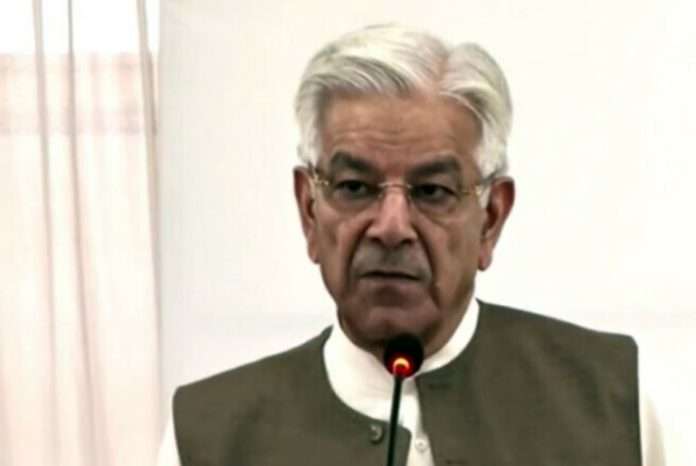 ISLAMABAD, OCT 14: Defence Minister Khawaja Asif on Friday said recent talks with the outlawed Tehreek-i-Taliban Pakistan (TTP) bore “no concrete outcomes”, even as thousands of Swat residents took to the streets in protest of the rise of militancy in the region.

For weeks now, KP residents, particularly of Swat, have been protesting against terrorism, most recently warning that they would march to Islamabad if terrorists aren’t reined in.

Even today, there were reports of protests in the Charbagh tehsil of Swat and in the Shangla’s Alpuri area. It was in Charbagh that a school van came under the fire of militants earlier this week, which left the driver dead and two students wounded.

However, Pakistan annual conference 2022 as a keynote speaker, the minister insisted the situation in Khyber Pakhtunkhwa was “under control” and would be “tackled amicably” in case of any untoward situation.

In a report by Arab News, Asif appeared to rule out intervention in the region, and voiced his preference for “peaceful means”. “We are not thinking of any intervention, it’s not on the cards,” Asif was quoted as saying.

“Absolutely we will use other means, peaceful means, and if we have to resort to some other forces to control [it] and if that is inevitable, we will resort to that Inshallah.”

Instead, Asif made it clear that the KP government should take cognisance of the situation, whereas the federal government would support it in any case of counter-terrorism.

“It is very heartening to see the public coming to the streets on their own for their rights. I feel confident that the situation will be brought under control. However, the recent revival of a few terrorists is an expected spillover from Afghanistan,” he said.

The minister added that the success of the relationship between Pakistan and Afghanistan was of great significance, as Pakistan could not remain oblivious to what was happening in Afghanistan.

“Peace in Pakistan is dependent on peace in Afghanistan. We will use peaceful means to resolve the matter and we will use force if it’s inevitable to purge the country from the menace of terrorism.”

He mentioned that the defence forces of Pakistan were fully equipped and the most battle hardened anywhere in the world. “The frontline forces for the last three decades are fighting against extremism. Our experiences and sacrifices are unmatchable.”