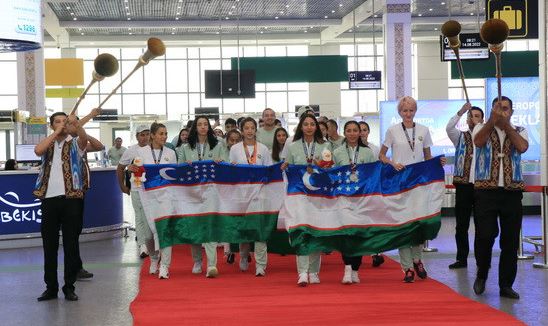 Tashkent: The leadership of the Athletics Federation of the Republic of Uzbekistan solemnly welcomed its athletes, who these days took part in the 5th Islamic Solidarity Games in Konya (Turkey). To date, the country’s national team has 94 medals, of which 4 gold, 2 silver and 2 bronze medals have become a worthy contribution from athletes of Uzbekistan.

Athletics acted as one of the springboards for the national team to the leading lines in the team event. Uzbekistan today occupies the 3rd place.

More than 4,000 athletes from 56 countries of the world participate in the 5th Islamic Solidarity Games in Konya.

It is worth noting that at the Islamic Solidarity Games, the delegation of Uzbekistan became one of the largest and was represented in almost all sports. This became possible thanks to the comprehensive and active support from the Ministry of Sports Development of the Republic of Uzbekistan and the National Olympic Committee at every stage of preparation for international competitions.

The Secretary General of the Athletics Federation Kamoliddin Ruzamukhamedov, meeting the athletes, noted that the tasks set by the President of the Republic of Uzbekistan Shavkat Mirziyoyev and the sports authorities were fulfilled thanks to the well-coordinated teamwork of athletes, coaches and the Federation.

A great contribution to the high results of athletes in Uzbekistan was made by the leadership Uzbekneftegaz JSC, which since February 2022 has headed the activities of the Athletics Federation. Athletes got the opportunity to conduct more thorough preparation for international competitions, participate in sports camps several times, and receive improved logistical support.

“The most difficult stage at the Games in Konya was the psychological preparation of athletes,” notes the coach of the Uzbekistan national team Oleg Verzilin, “Many of the young athletes participated in competitions of this level for the first time. And if they were physically ready, then the psychological mood required special attention. The geography of the countries participating in the Games expanded, and athletes from the African continent and South-Eastern Europe took part in the competition. This has become an additional challenge for our athletes. But the guys coped with the excitement and showed decent results. The Islamic Solidarity Games have become a good preparation for the upcoming XIX Asian Games, and will further point the way to Paris 2024.”

Sharif Davronov, who won an uncompromising victory in the triple jump at the World Championships in Athletics among U – 20, also managed to get to competitions in Turkey and returned to Uzbekistan with well-deserved gold. As Sharifa shared in an interview, the comprehensive support of the coach Muzafar Karimov allowed her to competently prepare and perform well at the competitions.

“In the final in Konya, I competed with athletes from Turkey,” says gold medalist Anvar Anvarov, “ Psychologically, of course, it was more comfortable for them to perform in their native territory. However, fifteen years dedicated to athletics and the right attitude from the coaching team taught me the necessary endurance and concentration in such exciting moments. My father brought me to the sport, and during the competitions, the family also actively supported me.”

Athletics is one of the most popular and highly competitive sports disciplines in the world. In addition to supporting professional athletes in Uzbekistan, the Athletics Federation organizes mass events to select potential youth for the national team of the country and to involve the population in active sports and physical education, such races as

A new record of Uzbekistan U20 in the 100m hurdles was set by Lidia Podtsepkina. In the preliminary heat, she ran the distance in 13.61 (+1.5 m/s) and improved her previous result by 0.16 seconds.