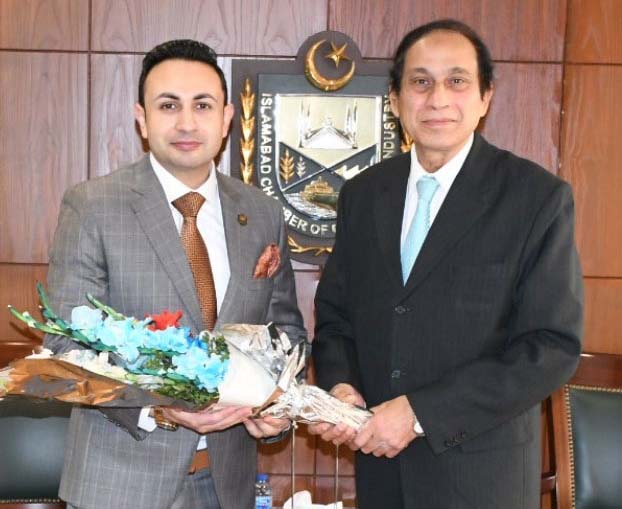 Islamabad (      ) Pakistan’s former ambassador to South Korea, Shaukat Ali Mukadam said that many Korean companies, especially SME were interested to come to Pakistan for business and investment as they intended to move out of Korea, however, they needed information about cost of land and cost of setting up manufacturing units in Pakistan to enhance their presence in Pakistani market. He said this while exchanging views with Sardar Yasir Yasir Ilyas Khan, President, Islamabad Chamber of Commerce & Industry during his visit to ICCI.

Shaukat Ali Mukadam said that there was good scope to increase the volume of trade between Pakistan and South Korea and urged the Pakistani manufacturers to concentrate on value addition of their products to promote exports to South Korea. He said that there was a great potential for Pakistani business community to promote fruits and many other items to Korea. He said that the Koreans had learnt a lot from Pakistan in the 60s and today the secret behind their progress and prosperity was the implementation of right policies. He urged that ICCI should consider taking a delegation to South Korea to get first-hand knowledge about business opportunities there. He assured that he would work for promoting the trade and investment relations between Pakistan and South Korea and his Embassy in Korea would extend all possible cooperation to business delegations.

Speaking on the occasion, Sardar Yasir Ilyas Khan, President, Islamabad Chamber of Commerce & Industry (ICCI) said that South Korea’s annual exports were over $500 billion, but Pakistan-Korea bilateral trade was around $1.1 billion, which was nominal compared to real potential of both countries. He said that both countries were negotiating a free trade agreement that should be finalized soon to boost bilateral trade. He said that Pakistan could export many products to Korea including textiles products, cotton, fruits, rice, raw hides & skins, fish, surgical instruments, medical apparatus, toys and games, leather products and Koreans should be encouraged to enhance their imports from Pakistan. He was of the view that a little more attention by the Korean Government and businessmen can increase Pakistan’s exports to Korea considerably.

Sardar Yasir Ilyas Khan said that Pakistan needed technology transfer from Korea to upgrade its indigenous industry and the Ambassador should play a role for this purpose. He said that Pakistan’s large market of over 200 million people with its strategic location as a gateway for Central Asian States and other regional countries offered tremendous opportunities for relocation of Korean industries to Pakistan. He said that SEZs in Pakistan offered many incentives including long term tax holidays and duty free import of industrial machinery, therefore, Korean investors should be apprised of these incentives to explore JVs and investment in Pakistan. He said that many Korean companies including LG, Samsung, Daewoo, Kia, Hyundai were already doing business in Pakistan and more should come to Pakistan to earn lucrative returns. He said that ICCI was working for a One Window facility for investors and would help Korean companies in exploring JVs and investment