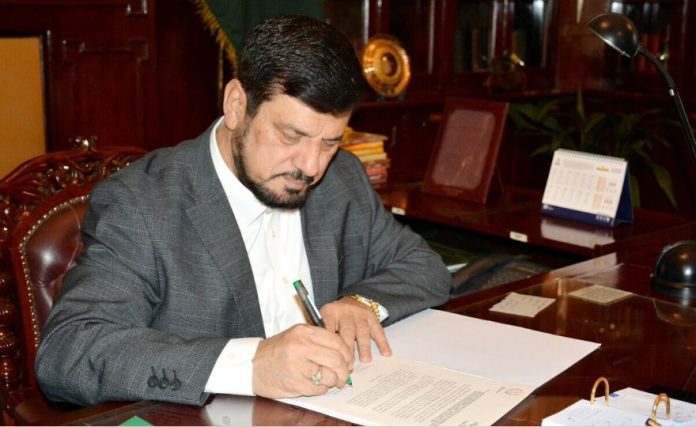 The move comes days after the dissolution of the Punjab Assembly as PTI Chairman Imran Khan has vowed to disassociate himself from the “current corrupt political system” by quitting the two assemblies where he is in power.

A notification from the governor, was dispatched to CM Mahmood and Leader of the Opposition Akram Khan Durrani. It said the KP Assembly and provincial cabinet were dissolved with immediate effect under Clause 1 of Article 112 of the Constitution.

The notification said that the caretaker CM would be appointed by the governor in consultation with Mahmood and Durrani. The governor called on them to provide the names of their nominees for the position by January 21.

He added that until the appointment of the caretaker CM, Mahmood will continue to hold office to perform the day-to-day affairs of the province.

Talking to reporters in Peshawar later in the day, Ali said that he hoped Mahmood and Durrani would not “waste any time” and decide on a name for the caretaker CM with consensus so that the “country can solve its political and economic crisis”.

He said that he himself acted promptly because the eight to nine months had already been “wasted”.

“Why are attempts being made to create a quagmire […] let the people of Punjab and KP decide,” he added.

On Tuesday night, Mahmood had formally advised the governor to dissolve the provincial legislature. The chief minister’s advice said: “I, Mahmood Khan, chief minister of Khyber Pakhtunkhwa, in pursuance of provisions of Article 112(1) of the Constitution of the Islamic Republic of Pakistan, do hereby forward my advice for dissolution of KP Assembly on January 17, 2023, at 17:00 hours.”

Later, in a video message, he had said that the PTI would return with a “two-thirds majority not just in KP but all of Pakistan and form a government on the basis of our performance”.