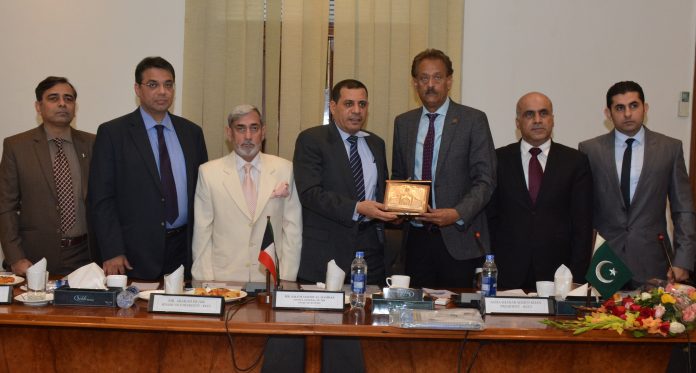 KARACHI, DEC 04 (DNA) – Consul General of Kuwait Salem Yousif Al-Hamdan has said that in order to further discuss and devise strategies for easing the issuance of business visas, the Kuwaiti Interior Ministry was ready to hold negotiations and in this regard, Pakistan’s Ministry of Interior had been approached quite some time ago but unfortunately they have not received any response from them so far.

Kuwaiti Consul General, who was speaking at a meeting during his visit to KCCI, informed that around 120 communities were living in Kuwait which was the basic reason why Kuwait has to adopt stringent visa policy which was not just for Pakistanis but also for all the foreigners.

“We want to ease issuance of business visa hence, negotiations must take place between the Interior Ministries of the two friendly countries as soon as possible”, he added.

In response to President KCCI’s remarks about the significance of China-Pakistan Economic Corridor (CPEC) who invited Kuwaiti business community invest in numerous CPEC related projects, Kuwaiti Consul General pointed out that it was a very important project which would have a positive impact not only on Pakistan but the entire region.

he said, adding that this conference would help in raising awareness about the significance of CPEC project and provide a perfect opportunity to highlight the immense CPEC-related investment opportunities in Pakistan.

Salem Al-Hamdan further mentioned that Kuwait has signed many MoUs with different institutions from all provinces in Pakistan while work on some of these MoUs has already begun and the Kuwaiti Investment Authority was also intending to undertake numerous projects in Pakistan, particularly in Sindh province.

Referring to an MoU signed between Kuwait Chamber and Karachi Chamber, he said that both chambers had excellent relations in the past but with the passage of time, some gap has developed as no interaction was taking place between the two institutions.

“Hence, I decided to visit KCCI and will certainly be making efforts to restore communication between Kuwait and Karachi Chambers by playing the role of bridge between the two institutions”, he added. = DNA