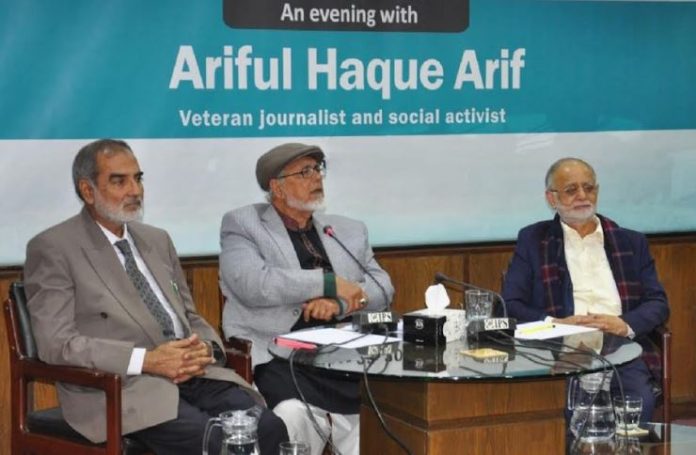 Islamabad, NOV 25: The standard of journalism in Pakistan is gradually deteriorating as many journalists have become biased parties, listening to one side, and then building and reporting narratives in a distorted way. This way, they are not only failing to report the truth but also creating instability and confusion in the society.

Presenting his observations on the current situation of journalism in Pakistan, Arif stated that extreme polarization, blame games, false narrative building, and threatening of opponents is having significant repercussions on the country and its society. Due to the causal effect of journalism in politics, and in turn on the society as whole, a journalist should not act as a powerbroker, unless it falls under the umbrella of national interest and political stability.

He emphasized that media persons need to learn lessons from pre-independence journalists like Zafar Ali Khan, Maulana Muhammad Ali Jauhar, Abdul Majeed Salik, Charag Hasan Hasrat, and Ghulam Rasool Mehar, who were leaders as well as authors and historians at the same time, uniting people on one hand, and shaping public opinion for the better on the other.

The speaker also saw building and strengthening of independent institutions indispensable for development, growth and stability of the country. To achieve this, he viewed, politicians and policymakers needed to be strong, sincere and honest, making sure that they do not politicize the institutions for their own gains. On the other hand, journalists must also maintain objectivity to preserve media as an effective pillar of the state, he concluded.