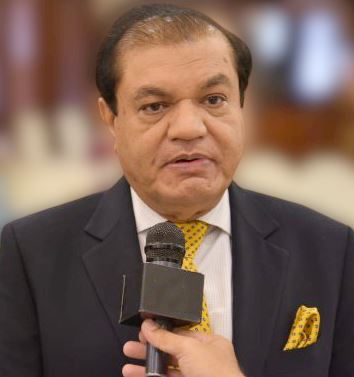 ISLAMABAD: Chairman of National Business Group Pakistan, President Pakistan Businessmen and Intellectuals Forum, and All Karachi Industrial Alliance, and former provincial minister Mian Zahid Hussain on Monday said the government would have collapsed and the country would have gone bankrupt after great instability if the value of the dollar was not eroded.

We are grateful for General Bajwa’s personal efforts to save the country from anarchy and to stabilize the sliding economy, he said.

Mian Zahid Hussain said that the business community hopes that the army will continue to perform its duties for national security in the future as well.

Talking to the business community, the veteran business leader said thatsome miscreants are still criticizing the army and raising pointless questions about the helicopter crash which is highly condemnable and shameful.

He paid glowing tribute to Gen. Sarfaraz Shaheed who not only helped people during the floods but also took many steps to provide relief to the people and saved many livelihoods in Balochistan.

Mian Zahid Hussain said that the export of grain from Ukraine has started, which is reducing the fear of food shortage in the world and famine in many poor countries but it will take some time.

He said that after the increase in the prices of all agricultural inputs in Pakistan, now the price of DAP has also increased significantly, which has raised concerns about the wheat crop.

The government should try to import at least 50 million bags of DAP from other countries or reduce its price in the local market or give subsidies to farmers, otherwise, the food security situation in the country may worsen.

Mian Zahid Hussain said that a bag of 50 kilos of DAP was worth 6,000 a year ago, but now it has become 14,800, the price of which many small farmers cannot afford.

It is necessary to reduce, while the price of urea also needs to be reduced to 2100 rupees, otherwise, the production of wheat may decrease up to five and a half lakh tons, after which heavy expenses will have to be incurred to import wheat.

He said that some improvement in the situation is possible if the yield is reduced due to the use of fertilizer.