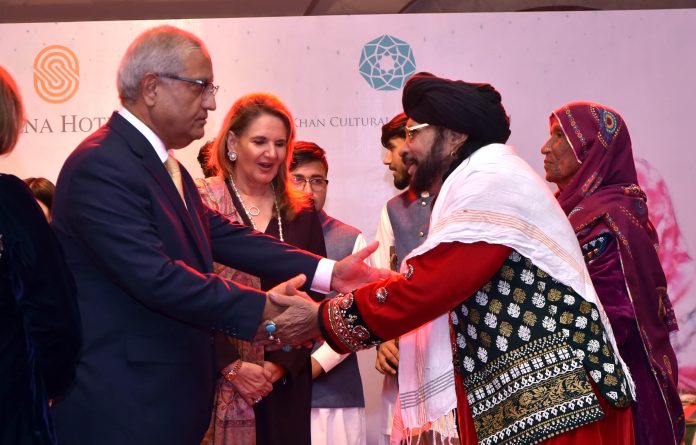 Honour the Pakistan iLaureates of the Aga Khan Music Awards 2022

ISLAMABAD: Serena Hotels and the Aga Khan Trust for Cultural Services hosted an evening celebrating the laureates of the “Aga Khan Music Awards” that was established in 2018 by His Highness to recognize and develop exceptional creativity, promise and enterprise in music, and music education in societies across the world where Muslim communities have a significant presence.

The event was attended by prominent dignitaries including Diplomats, Federaland Provincial Ministers, Government functionaries, Representatives from Corporate Sector, and business community and media houses. The evening was illuminated by live performances by the award winners Sufi Music Legends Sain Zahoor and Zarsanga along with a performance by the students of Leif Larson Music Centre

The Leif LarsenMusic Centre,which was established in April 2011,at the Altit Fort with the intention of training young generation on the use of old musical instrumentsfor ensuring the cultural music of the Northern Areas of Pakistan.

The Laureates of the 2022 Aga Khan music award selected 15 top performers for the main award by a master jury out of 400 nominees from 42 nations. They share the prize money of  $ 500,000 USD was shared by the 15 award winners.

The award winners from Pakistan were the “Queen of Pashtu”Zarsanga and the “Mystical Punjabi Sufi Singer”Sain Zahoor, whose work stands out on its own as being unique and standalone power houses. The award ceremony was hosted in October 2022, in Muscat, Oman in a two-day musical gala held at the Royal Opera House of Musical Arts. The awards presentation marked the culmination of a spirited celebration, featuring the laureates, who showcased their talent on a global platform.