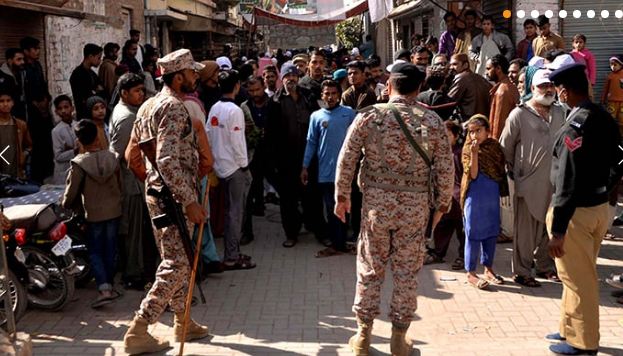 KARACHI: The counting of votes started across several districts of Sindh — including Karachi and Hyderabad divisions — after the polling process of the second phase of local government (LG) elections ended at 5pm almost peacefully.

As hundreds of thousands of people headed to vote in a bid to elect their local representatives, many political parties complained and demanded the Election Commission of Pakistan (ECP) to increase the polling time as the process began late at some of the stations.

However, the polling which kicked off at 8am ended at the scheduled time — 5pm — after the election commission decided against extending the duration, but allowed its partial continuation.

In a statement, Chief Election Commissioner Sikandar Sultan Raja said that “voters present inside polling stations at the closing time are allowed to cast their votes”.

But at scattered polling stations, the officials have allowed polling to continue for another two hours as the process faced delays due to wide-ranging reasons, including the polling agents not reaching on the stipulated time and polling materials not being available at some stations.

Although the Mutahida Qaumi Movement-Pakistan (MQM-P) boycotted the polls at the 11th hour, Sindh Minister for Information Sharjeel Inam Memon observed that the voter turnout was “fine”.

The security situation mostly remained peaceful, and the polling process continued without hindrances at several stations. However, a clash took place between an independent candidate and his Pakistan Peoples Party (PPP) counterpart in Matiari, resulting in the injury of at least four people.

After the polling process ended, another clash took place in Karachi’s Chanesar Goth, with two workers from two political parties — PPP and Jamaat-e-Islami (JI) — exchanging blows. Following the incident, a heavy contingent of police and Rangers reached the site.

The commission had called on the Pakistan Army to provide security for the polls, but the General Headquarters (GHQ) excused itself amid the ongoing security situation. The GHQ, although, provided Rangers personnel for ensuring law and order.

Ahead of the conclusion of the polling process, Jamaat-e-Islami (JI) Karachi Emir Hafiz Naeem Ur Rehman appreciated the law enforcement agencies for keeping peace in Karachi during the polls.

Rehman, after casting his vote, claimed that people burned the camps in some places, however, voters are still reaching their respective polling stations.

“No untoward incident has been reported from [Districts] Central and East,” he added. He claimed that the people want a JI member to be elected as mayor.

Talking about the MQM-P’s decision to boycott the elections, the JI leader said that the party has run away from the polls.

Meanwhile, Pakistan Tehreek-e-Insaf (PTI) Secretary-General Asad Umar claimed that the election staff has not reached some of the polling stations. He alleged that efforts are being made to spoil the polls.

Sindh Labour Minister and President of PPP Karachi Division Saeed Ghani — after casting his vote in UC 8, Chanesar Town — said that once the results are announced in Karachi, PPP will emerge as the largest political party in the city.

Ghani also expressed confidence in the PPP’s performance and said: “I have been saying for over a year that the city of Karachi belongs to Bhutto, and “InshAllah, the results of today’s elections will prove it”.

Echoing the sentiments of PPP Chairman and Foreign Minister Bilawal Bhutto-Zardari, the labour minister said: “Now the mayor of Karachi will be a Jiyala from PPP”.

PTI leader Firdous Shamim Naqvi, upon entering a polling station, forcefully broke the seal of ballot boxes as the police personnel stationed there kept looking on.

In response, the ECP took notice and ordered the expulsion of the PTI leader, who has held the position of the opposition leader in the Sindh Assembly.

A video of Naqvi opening the seal of a ballot box amid voting in a bid to affect the polling process in Karachi went viral. The incident took place in the polling station of UC ward 4 of Karachi’s Soldier Bazar.

Reacting to the matter, PPP wrote a letter to the ECP to lodge a complaint against Naqvi for violation of election rules. PPP leader Taj Haider said that the video clip of the incident shows Naqvi opening the ballot box.

He urged the ECP for immediate notice and action against the PTI leader.

The election commission said that the seals of the ballot boxes were broken in UC 2 of the tehsil municipal committee Jinnah. This is an illegal act and a violation of the ECP’s code of conduct, said the electoral body.

‘Irresponsible’ statements and violation of code

As the polling process was underway today, the election commission took notice of “irresponsible statements” issued by the political parties during the LG polls today.

“The statement by Interior Minister Rana Sanaullah is equal to misguiding the people and it shows his lack of awareness regarding the election laws,” the ECP spokesperson said.

The commission’s spokesperson said that providing the number of local councils is the provincial government’s prerogative under the Sindh Local Government Act, 2013.

He said that the government provided the number of local councils to the ECP and the Commission was bound to conduct the delimitation process in accordance with the provided number.

“The ECP conducted the delimitation process in a transparent way,” the spokesperson stressed.

In his statement earlier today. Rana Sanaullah claimed that the elections had been “discredited” after the MQM-P — who had reservations over the delimitation — decided to boycott the polls.

Around 8,706 polling stations were set up for the local body polls with 1,204 for males and 1,170 for females in the two divisions — Karachi and Hyderabad. Out of the total polling station, over 8,000 were declared as “sensitive” or “highly sensitive.”

It is pertinent to mention here that 830 candidates — seven in Karachi and 823 in Hyderabad — have been elected unopposed in the two divisions.

In Hyderabad, 6,774 candidates contested for 1,675 seats of chairmen, vice chairmen of union councils/union committees, and the general wards.

While in Karachi, 9058 candidates are in the race for 246 seats of chairman, vice chairman, and general member.

As many as 20 FC platoons — comprising 800 personnel — have been provided to the Sindh Police to assist in ensuring security during the LG polls in Karachi and Hyderabad, FC Commandant Salahuddin Mehsud told.

Moreover, a spokesperson of the provincial police said more than 43,605 law enforcement officials and personnel are performing their duties under the security plan devised by the Sindh government.

As many as 26,050 officers and personnel were deployed on election duty at 4,997 polling stations in Karachi only, in view of security concerns and perceived threats.

At least 17,588 police personnel have been posted in the East zone. Meanwhile, 6,533, 4,837, and 6,218 comprising officers, personnel and staff have been deployed in the District East, Malir, and Korangi, respectively.

Deployment of officers, personnel and staffers in the West Zone, District Central, and District West totalled 14,390, 9,672, and 4,718, respectively.

About 3,800 traffic police personnel have also been performing their duties. They have been deployed to assist the administration at the polling stations.