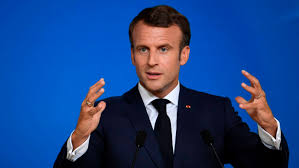 Edouard Philippe has handed in the resignation of the government to the president of the republic, who has accepted it

PARIS (DNA) :  French President Emmanuel Macron has removed Edouard Philippe, his prime minister, and will shortly name a replacement and a new cabinet for the last two years of his presidency.

“Mr Edouard Philippe has handed in the resignation of the government to the president of the republic, who has accepted it,” said a brief statement from the Elysée Palace on Friday.

“He will ensure, with the members of the government, the management of current operations until the nomination of the new government,” the statement said.

Mr Macron is eager to relaunch his presidency ahead of the next presidential election in 2022. His first three years have been marked by sometimes contentious economic reforms, the gilets jaunes anti-government protests, and the coronavirus pandemic that has killed nearly 30,000 people in France and triggered a deep recession.

Mr Philippe could in theory be reinstated as prime minister leading a reshuffled cabinet, but the resignation of the whole government suggests Mr Macron has in mind something more ambitious than a handful of new ministers.