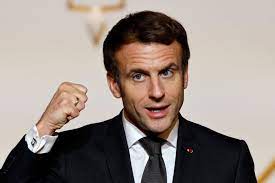 PARIS: Projections show that Emmanuel Macron has secured a clear victory over far-right rival Marine Le Pen. Macron got 58 per cent votes while his rival finished with 42 per cent.

Just to remind you that these projections prepared by French media use a combination of real results and exit polls and are considered ultra-reliable in this two-way contest.

Make no mistake, this was Marine Le Pen’s best chance of victory and yet it didn’t happen. Her campaign was slick, her focus on the cost of living chimed with the voters, and she performed well in the big TV duel days ago.

Macron didn’t even enter the election until eight days before the first round, prompting accusations of arrogance. But when he did take part, the voters clearly listened. Even though Le Pen offered tax cuts and no rise in the pension age, they decided his proposals were more realistic and they rejected hers. Softer they may have been, but they were still far right.

Not for 20 years has France backed a president for two terms, and never before has a president been re-elected with a majority in parliament.