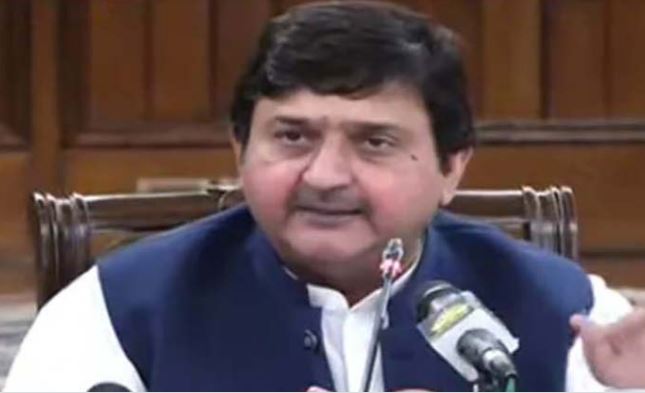 LAHORE, OCT 26 – Prime Minister s Assistant Malik Ahmad Khan on Wednesday warned if the situation in the country deteriorates, then martial law will be imposed, saying that the martial law is not the solution to any problem.

Talking exclusively on program “Nuqta e Nazar”, Malik Ahmad Khan said that the situation is very unusual as around 100 PTI lawmakers have resigned. Saying that he believes in talks with the political parties, Malik Ahmad claimed that the objective of Pakistan Tehreek-e-Insaf (PTI) is not to hold elections, but something else.

Citing the statement of PML-N supremo and former premier Nawaz Sharif, Malik Ahmad stated that he [Nawaz] said that the PTI wants to appoint an army chief of its choice. It is the authority of the government to appoint the COAS, added Malik.
The SAPM said that he had a conversation with PTI leader Fawad Chaudhary yesterday, adding that what will be more degradation than this if the politicians will not hold talks with each other.

Questioning the PTI leadership, Malik Ahmad went on to say what objectives the party [PTI] wants to achieve by staging a long march. The Special Assistant further said that if the situation worsens, then the result will be martial law, but martial law is not the solution to any problem. The current leadership of the military institutions also believes that the solution to the country s problems lies in the continuation of democracy, he added.

Believing that the charter of the economy is the only solution to the country’s problems, Malik Ahmad said that the country will face economic challenges, unless one formula is fixed.

He urged avoiding speculations regarding the unfortunate death of senior journalist and not use the issue for political gains. Denouncing institutions over Arshad Sharif’s murder was condemnable, he said adding that baseless allegations against institutions were not right.

He added that the Kenyan police and government had given a statement regarding the incident and further investigations were underway.