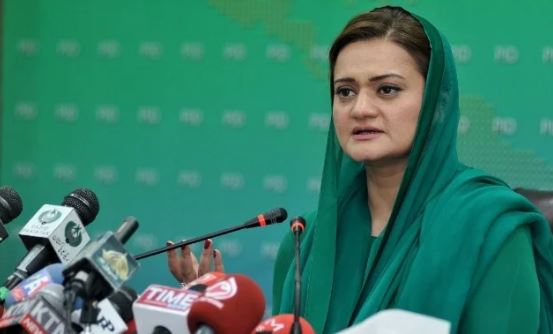 While addressing a press conference in Islamabad today, Marriyum Aurangzeb alleged that the PTI chief was not hit by any bullet and that Khan was telling a lie before the nation. She mocked that Imran Khan’s long march has converted into a work-from-home event.

The information minister said for the first time in history, a prime minister was ousted from office through a no-confidence motion in Pakistan. She criticised Imran Khan termed the no-trust move conspiracy and then took a U-turn. She added that the former premier is telling everyone ‘it is over now’ who used to say ‘absolutely not’.

She alleged Imran Khan always tried to divide the nation and that he will be answerable for his wrongdoings.

While commenting on the Toshakhana scandal, Aurangzeb asked the PTI chief to give the sale receipts of the wristwatches instead of approaching UK and UAE courts. She claimed that Farah Khan and Shahzad Akbar became facilitators of Imran Khan to sell the Toshakhana wristwatches.

“In Khyber Pakhtunkhwa (KP), the accountability commission is closed for the last 10 years in a province which is being ruled by a person who is talking about justice. The amount acquired after the sale of wristwatches was brought to the country by money laundering.”

“Imran Khan blackmailed the National Accountability Bureau (NAB) Chairman through videos. He stole the Toshakhana watches first and then he conducted his cheap evaluation. After selling the wristwatches, they brought the cash to the country.”

The information minister questioned how Umar Farooq Memon got the wristwatches of the Toshakhana. She further alleged that the former premier Imran Khan closed projects of the China-Pakistan Economic Corridor (CPEC), whereas, investments from Turkiye and UAE had also remained closed.

She said that sugar crushing is a provincial issue and the Punjab government is not granting permission for sugar crushing. “Actually, Imran Khan is exhibiting a lack of confidence in Pervaiz Elahi.”

Aurangzeb said the nationals are now fully aware of Imran Khan’s real motives and the PTI chief will be held accountable for all of his wrongdoings. She challenged Imran Khan to dissolve Punjab and KP assemblies if he fails to register the First Information Report (FIR) of his own choice. =DNA