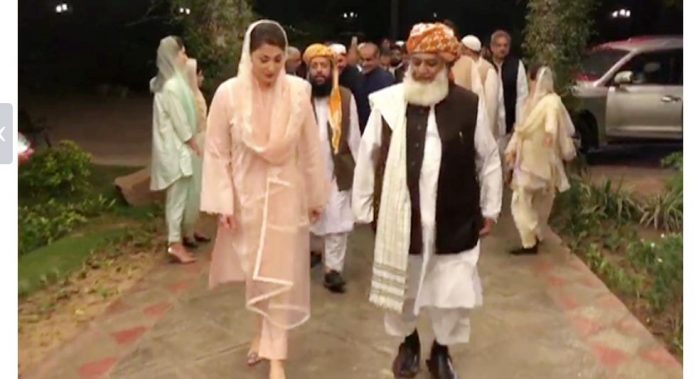 ISLAMABAD, MAR 28 – PML-N Vice President Maryam Nawaz and Jamiat Ulema-i-Islam-Fazl (JUI-F) Chief Maulana Fazlur Rehman have suspended their political activities for some days due to their health, the spokespersons of their respective parties said on Sunday.

PML-N spokesperson Marriyum Aurangzeb said that Maryam has “high fever and throat pain”. The PML-N vice president has been advised by doctors to rest, added Aurangzeb.

Her test result for the novel coronavirus, however, was negative, said her political secretary Zeeshan Malik.

“Maryam Nawaz went to the Lahore High Court (LHC) despite being unwell,” Aurangzeb said in a statement shared by the party’s Twitter account.

Maryam has cancelled her political activities for the next four days.

Maryam had appeared at the LHC on Wednesday for the hearing of her petition seeking pre-arrest bail in an illegal land acquisition case. She had been granted bail and directed to appear before the investigating officer of the National Accountability Bureau (NAB).

However, the bureau postponed Maryam’s appearance at its Lahore office on March 26, citing the spread of the coronavirus.

Meanwhile, a spokesperson for the JUI-F said that Rehman has had fever for the last two days. He has also been advised to rest by doctors and is currently at his home in Dera Ismail Khan, the spokesperson shared.

“Maulana Fazlur Rehman’s corona test report is negative. He has cancelled his political activities because he is unwell,” he added.

Maryam and Fazl have been at the forefront of the opposition’s Pakistan Democratic Movement (PDM), which recently suffered a setback after differences appeared amid the alliance, particularly with the PPP over the Senate opposition leader.

Following the declaration of PPP Senator Yousuf Raza Gilani as the opposition leader of the upper house of parliament, Maryam alleged that PPP co-chairman Asif Ali Zardari had offered a deal to the PML-N in a meeting of the PDM, purportedly backed by the establishment, of regime change in Punjab.

On the other hand, PPP Chairperson Bilawal Bhutto-Zardari said PML-N should not have expected PPP members to vote for its “controversial” candidate, Azam Nazeer Tarar.

Asfandyar Wali Khan, whose Awami National Party (ANP) is part of the 10-party opposition alliance, too tested positive for Covid-19. The ANP chief quarantined himself at Wali Bagh Charsadda while scheduled meetings of the party were postponed.