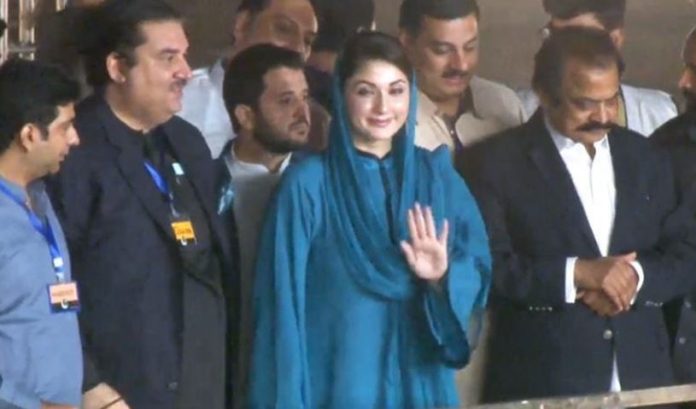 Lahore’s Shahdara police on Tuesday registered a case against PML-N Vice President Maryam Nawaz, her husband retired Captain Mohammad Safdar and other party leaders and workers for damaging public order by “causing trouble for citizens, blocking roads, unnecessarily using loudspeakers and microphones and violating coronavirus standard operating procedures (SOPs)” in the run up to the October 16 rally of the Pakistan Democratic Movement in Gujranwala.

The first-information report (FIR), a copy of which is available with Dawn.com, was registered under sections 269, 270, 290 and 291 of the Punjab Maintenance of Public Order Ordinance, 1960, and sections 6 and 16 of the Punjab Sound Systems (Regulation) Act, 2015.

It said that three policemen of the Shahdara police station — Mohammad Imran, Amir Ali and Sajjad Ahmed — were present at the Begum Kot Chowk when they were informed that PML-N leaders had set up a stage on a trawler to welcome participants of the Pakistan Democratic Movement’s first rally in Gujranwala.

Malik Riaz, Samiullah Khan and Capt Safdar were present on that stage and they, along with 800 to 900 workers, were chanting slogans against the government and its institutions, the report added.

The policemen said when they reached the site, a caravan of 80 to 90 cars, led by Saleem Butt and Ali Pervez Malik had also arrived. Meanwhile, the main PML-N caravan also reached Shahdara Chowk via the Niazi Shaheed Chowk.

“There were two big cranes and a truck in front of the caravan, because of which, the traffic on Shahdara Chowk, coming from all directions, was disrupted and a painful situation was created for the public.

“The organisers of the caravan were asked to remove the cranes and truck but they refused to do so. Meanwhile, Capt Safdar, Riaz and other party leaders were illegally using loudspeakers and microphones to rouse party workers by raising incendiary slogans against the government and law enforcement agencies,” the FIR reads.

It added that despite multiple threat advisories issued by security agencies to the PML-N leadership, party vice-president Maryam Nawaz came out of her car and addressed workers.

“Maryam then ignored security SOPs and addressed the workers, exposing herself and putting her life in danger.

“In this way, Maryam, Safdar and other leaders and workers collectively violated the law by sloganeering against the government, causing trouble for citizens, violated SOPs by not maintaining social distancing, blocking roads and [through] unnecessary use of loudspeakers and microphones.”

The FIR further added that Maryam, in her address, asked party workers and leaders to “be ready to send Imran Khan’s government home”, adding that it incited them and they started “extreme sloganeering against the government”.

According to the FIR, none of the leaders or workers were wearing a mask or maintaining social distancing. Traffic was also badly blocked from New Ravi Bridge to the matchsticks factory on GT Road and from Shahdara Chowk to Begum Kot Chowk [because of the rally], it said.

The registration of the case comes a day after Safdar was arrested and then granted bail for “violating the sanctity of the Quaid’s mausoleum” in Karachi.

Both Maryam and Safdar were in Karachi to attend the second major rally organised under the banner of PDM on Sunday.

Maryam had tweeted early Monday morning that her husband retired Captain Mohammad Safdar had been arrested by the police from their hotel in Karachi.

“Police broke my room door at the hotel I was staying at in Karachi and arrested Capt Safdar,” Maryam said via tweet.

He was later granted bail by a judicial magistrate against surety bonds of Rs100,000 in Karachi.

An FIR was also registered against Maryam, Safdar and 200 others for violating the sanctity of the Quaid’s mausoleum. The complainant, Waqas Ahmed, alleged that the PML-N leaders, along with 200 of their followers, reached the Quaid’s grave where Safdar jumped over the grill surrounding it.

The complainant said that he tried to stop him from doing so but Safdar “got out of control” and started threatening him and his fellows that he would kill them. He added that Safdar later damaged government property before leaving the site with his followers.

“My complaint is that Safdar and his cohort violated the sanctity of the Quaid’s mausoleum and his grave. A case [should be] registered against him for raising political slogans inside the mausoleum complex, death threats against me and for damaging government property.”

According to the FIR, a case has been registered under section 6, 8 and 10 of The Quaid-i-Azam’s Mazar (Protection and Maintenance) Ordinance, 1971.