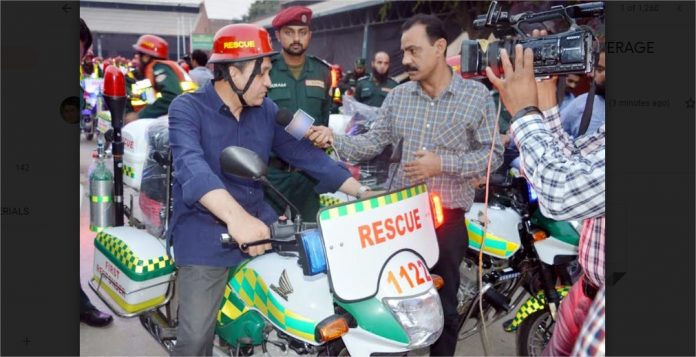 LAHORE, JUL 4 – The Director General, Punjab Emergency Service Dr. Rizwan Naseer, SI has congratulated the District Emergency Officer Lahore & of Motorbike Ambulance Service (MAS) on managing over 200,000 emergencies in Lahore while maintaining an average response time of 4.5 minutes, which is an achievement even internationally.

Dr. Rizwan Naseer DG Rescue Punjab appreciated the staff of the Motorbike Ambulance Service for providing exemplary services to the helpless poor victims of 200000 accidents and emergencies. It has also been observed that response time has also improved significantly as the Motorbike Ambulance Service provides effective response during traffic jams and congested areas with narrow streets to traffic crashes & medical emergencies. The Director General further said the Motorbike First Responders have enhanced operational efficiency of Rescue 1122 and overcome urban challenges in emergency response by ensuring immediate first hand professional handling of emergency victims and provided a sense of safety amongst citizens of major cities of Punjab.

It is pertinent to mention here that the Motorbike Ambulance Service was launched on 10th October, 2017 from divisional headquarters in Punjab including Lahore, Sahiwal, Multan, DG Khan, Bahawalpur, Faisalabad, Gujranwala, Sargodha and Rawalpindi with 900 Motorbike Ambulances & Emergency Medical Technicians.

Dr. Rizwan Naseer said that Motorbike Ambulance Service is equipped with life-saving equipment such as Pulse Oximeter, Glucometer, Blood Pressure Monitor, Life Saving Medicines, Portable Oxygen Cylinders, Airway & Burn Kit, Cervical Collar, Trauma Kit, Splints, is responding to around 700 emergencies per day in Punjab. As a result of the training and equipment provided to the Motorbike staff they are able to manage 35% of the emergencies at the site of the incident thus reducing the burden on the hospitals. He said that Motorbike Ambulance Service has turned out to be a very cost effective emergency response model and significantly reduced the burden on the ambulance service in these 9 divisions.