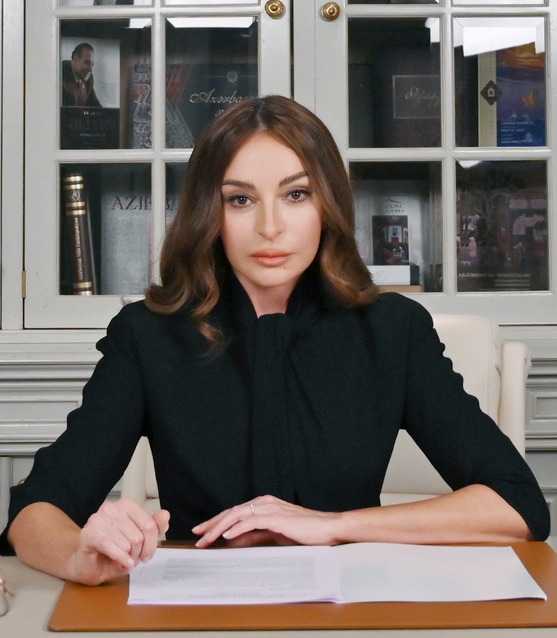 On August 26, the First Vice-President of the Republic of Azerbaijan Mehriban Aliyeva celebrates her birthday.

Founder of “Azerbaijani Culture Foundation” and “Azerbaijan – Heritage” magazine, which is published in three languages (Azerbaijani, English and Russian) in order to widely promote the Azerbaijani culture Mehriban Aliyeva was elected as President of Azerbaijan Gymnastics Federation in October 2002.

Mehriban Aliyeva has headed the Heydar Aliyev Foundation since 2004, which was founded to study the rich political legacy and promote the national statehood ideas of national leader of Azerbaijan Heydar Aliyev.

In August 2004, Mehriban Aliyeva was named Goodwill Ambassador of UNESCO for her role in protection and development of Azerbaijan’s intangible folk literature and national musical legacy.

In December 2004, Mehriban Aliyeva was elected as a member of the Executive Committee of NOC at the 4th General Assembly of the National Olympic Committee (NOC) of the Republic of Azerbaijan.

Mehriban Aliyeva has been a member of the New Azerbaijan Party’s Political Council since 2004, and deputy chairman of the party since 2013 and was elected as a Member of Parliament at the third, fourth and fifth convocation of the Milli Mejlis of the Republic of Azerbaijan respectively in 2005, 2010 and 2015.

Having received an academic degree of PhD in Philosophy in 2005, Mehriban Aliyeva was also named Goodwill Ambassador of ISESCO for her outstanding contribution to humanitarian area, including the development of dialogue among civilizations and cultures, promotion of Islamic cultural legacy and for her tremendous role in addressing problems of children with special needs in November 2006,

Mehriban Aliyeva, who is the author of many projects aimed at the social wellbeing of the people, carries the name of the First Lady with honor and presents to the world the proud image of the contemporary Azerbaijani woman. Azerbaijan’s First Lady is an exemplary image of the woman for Muslim women.

The Heydar Aliyev Foundation, which started operations under the leadership of First Lady Mehriban Aliyeva in 2004, provides unparalleled services towards the realization of the ideas of Heydar Aliyev the National Leader of Azerbaijan and the recognition of the rich heritage of statehood of this genius personality in the entire world. Revival and increased scale of Azerbaijani people’s traditions of charity have been possible based directly on the personal example provided by the President of the Heydar Aliyev Foundation. She is national with all of her decisions: she serves the progress of her motherland and works tirelessly for the sake of development of his country’s culture, education and sport. The schools, healthcare and medical facilities that were built or renovated even in the most outlying parts of Azerbaijan through the Heydar Aliyev Foundation can be an example of this. A lot of programs and projects have been implemented for this purpose. The Foundation has been taking an active part in increasing the international reputation of the Republic of Azerbaijan.

It should be noted that with the initiative and support of Mehriban Aliyeva, the Heydar Aliyev Foundation has implemented humanitarian social oriented projects in Pakistan, as well.

The opening ceremony of a secondary school for girls was held on February 9, 2008 in Rara settlement of Muzaffarabad city, which was damaged by the earthquake. During these years, with the initiative and support of the Foundation, free medical diognasis and operations were provided, there were contribution to building of medical facilities and water supply systems, charity events were organized, peoples with disabilities were provided with wheelchairs and other numerous projects were carried out in this direction.

In 2015, Mehriban Aliyeva has been awarded with high State Award of Pakistan – order of “Hilal-e-Pakistan”.