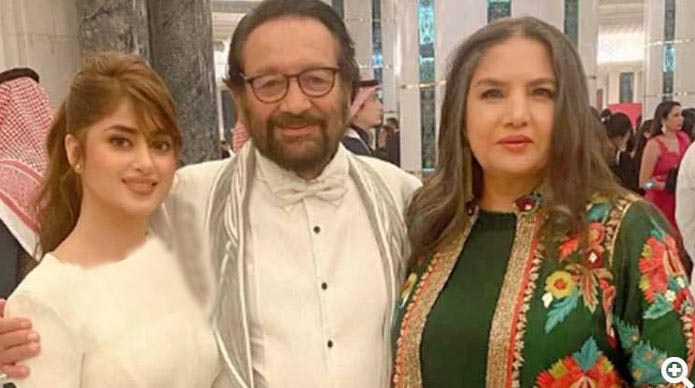 LAHORE – Pakistani actress Sajal has said she is lucky to work with Indian actress Shabana Azmi and director Shekhar Kapur.

The “Ye Dil Mera” actress attended the second edition of Saudi Arabia’s Red Sea International Film Festival which commenced on Thursday with a starry night as artists from all over the world walked the coveted red carpet.

The renowned festival returned for its second, extended spell this year and opened with Jemima Goldsmith’s “What’s Love Got To Do With It?”. The cast and crew including Pakistani star Aly, Indian actress Azmi and director Shekhar attended the screening.

Sajal looked gorgeous in an ivory gown, while Azmi was looking stunning in a green dress with multi-coloured embroidery on it.

After the premiere of their recent offering, the stars posed for pictures. The “Dhoop Ki Deewar” star Sajal also shared a picture with Ms Azmi and her director Mr Kapur. “My most favourite people. The LEGENDS. Meri khushnaseebi kay aap sath kaam karnay ka mauqa mila. (My good luck that I got the chance to work with you)”, she captioned the post on Instagram.

Her post’s comment section was showered with applauses. Pakistani actor Humayun saeed said he was proud of her while one of the top actresses in Pakistan, Mahira Khan said it was their good luck they got a chance to work with “our Sajal”.