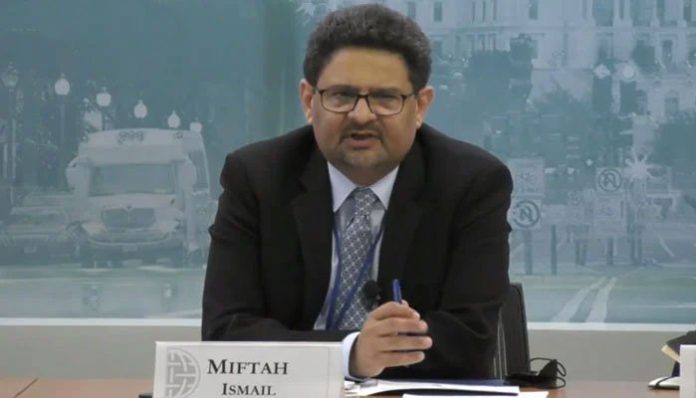 KARACHI: Finance Minister Miftah Ismail has once again said the government doesn’t plan to increase the prices of petroleum products. However, the minister hinted at an increase in the State Bank of Pakistan’s (SBP) interest rate.

Speaking during a media talk at the Karachi airport on Monday, Miftah said that former finance minister Shaukat Tarin had promised the International Monetary Fund (IMF) that the then government will not offer subsidies on petroleum products, instead, it will impose Rs30 tax per litre. He said this promise was made over a written agreement.

Miftah said that the subsidy on fuel has to be abolished and tax of Rs30 per litre has to be levied as per the promise made by Imran Khan and Tarin. “We have to pay the price of the promises made by the former government,” he lamented, adding that the government will have to increase the price of diesel by Rs150 following the formula of Imran and Tarin.

Referring to Prime Minister Shehbaz Sharif’s observation that the nation cannot bear the burden of a hike in oil prices, Miftah said that he would try to convince the IMF that the government can’t raise oil prices immediately as the nation cannot afford it and should be given some time.

He said that the government has granting the subsidy and it will continue.

Miftah went on to say that he finds Tarin’s statement ridiculous that his government left funds for the subsidy.

He asked the former government to tell him where they had left the money. “They have not left any money, instead they have violated the agreement with IMF,” he added.

Continuing his criticism, Miftah said that the PTI-led government showed 6% growth, but the IMF says that Pakistan’s economy is running fast and it should be slowed down.

“Now, we might increase the interest rate as well.”

He said that Imran Khan took a loan of Rs20,000 billion, which is 80% of the entire amount of loans taken in 71 years of Pakistan’s history.

He further stated that former planning and development minister Asad Umar caused Pakistan a loss of 9.1% which was a record loss in 52 years.

“Pakistan exported wheat when we [PML-N] left the government but today the country is importing wheat,” Miftah said.

He said that, he, as the finance minister of Pakistan, is forced to go to Doha for parleys due to Imran Khan’s call of the long march.

Miftah pledged to return after striking a deal with the IMF within two days but will not agree on the conditions Tarin did. He said that he would ask the Fund to give its conditions in written, which he will show to the prime minister.

A Pakistani delegation is holding talks with the Fund in Qatar, seeking the revival of the stalled $6 billion loan programme. Miftah is traveling to Doha to participate in the final round of negotiations.

The government is expected to withdraw energy subsidies and roll back unfunded subsidies to the oil and power sector.

According to reports, Pakistani authorities would make every effort to urge the IMF’s review mission that it should lower the cost of the inflation burden that will impact the population, and may ask for a phased-in approach to subsidy reversal, particularly on petroleum goods.