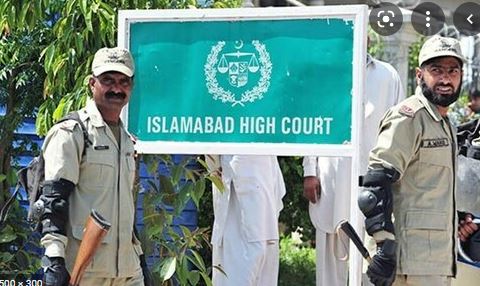 During the proceedings, IHC CJ Athar Minallah remarked that someone’s disappearance is the state’s failure and a serious crime against humanity. “Mazari Sahiba, the court has summoned you here to convey that no sagacity can be witnessed on the part of the state when someone is missing.

When a citizen goes missing then why should not the compensation be paid to that person’s family from the pocket of the chief executive whose under very nose he goes missing?” The court asked Minister Mazari to put forward her opinion in this regard and adjourned the hearing until December 13.

The court also ordered the federal government to satisfy Mudassir Naur’s family by the next hearing. The CJ remarked that the whole family faces trauma when one member of it goes missing.

Shireen Mazari responded “I totally agree with the court that all citizens have equal rights. The state’s reaction should be identical in every missing person’s case.” The CJ maintained that the rule of law is quite essential, otherwise such cases cannot be stopped.

When Shireen Mazari pointed out that the former government did not do anything in this regard, Justice Athar Minallah interrupted her saying: “Half of our lives have seen non-democratic governments and this all have been the result of it.”

When the court put off the hearing for December 13, additional attorney general sought additional one week’s time which infuriated the presiding judge who said “What are you talking about, the man has been missing for three years.”

On Monday last, the Islamabad High Court had ordered Minister for Human Rights Shireen Mazari and Interior Secretary Yousaf Naseem Khokhar to appear before the court on December 1 in the case.

The writer, poet and journalist Naru has not been seen since he disappeared on August 20, 2018 while on a vacation with his son and wife in Naran. His wife, Sadaf Chugtai, an artist and activist, died in May 2021 in her sleep, while their son who is barely four-year-old lives with his grandparents.

In the hearing on November 25, the high court ordered Prime Minister Imran Khan and the federal cabinet to listen to the grievances of the missing journalist’s family.

Justice Minallah asked the Deputy Attorney General Syed Tayyab Shah when the prime minister would listen to the family members of the missing journalist and told him to tell the court the exact date otherwise he would summon the Interior Secretary at the next hearing.

In Monday’s hearing, the chief justice expressed ire as the additional attorney general couldn’t tell the court the exact date of meeting of the prime minister and federal cabinet with the Naru’s family.

The IHC CJ noted the state would have responded differently, if son of a rich man would be missing.

Jusitce Minallah said it is a grave crime that a citizen goes missing. Later, the victim’s family has to visit a commission continuously to know about the missing person, he said, adding this procedure is unjustified. = DNA