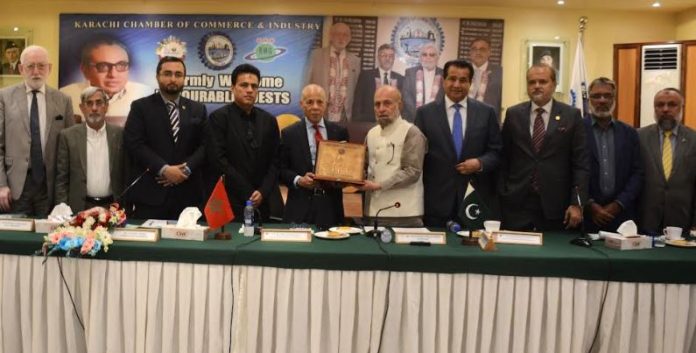 KARACHI, NOV 22 /DNA/ – Ambassador of Morocco Mohamed Karmoune has said that the existing trade volume was not enough so Morocco and Pakistan need to do more through enhanced interaction between the Chambers of Commerce and the business communities with a view to improve trade volume between the two brotherly countries.

Speaking at a meeting during his visit to the Karachi Chamber of Commerce and Industry (KCCI), the Moroccan Ambassador informed that preparations were underway for sending a Pakistani business delegation to Morocco in the month of December, which in addition to exploring opportunities for improving trade and investment cooperation, would also see how the Morocco and its economy have evolved. “I hope you’ll join this important delegation so that you could spread the message about trade and investment potential upon your return”, he added.

The Ambassador said that the kingdom of Morocco was one of the best destinations for tourism hence, Pakistan can learn greatly from Morocco’s experience in this area to promote its tourism opportunities. “Tourism is the driver of any economy in the world and same was the case with Morocco where tourism sector is performing very well and it also carries good investment opportunities for the business community of Pakistan”, he added.

He informed that Morocco holds around 70 percent of world’s phosphate reserves that was the main attraction towards the kingdom of Morocco which was also become a champion of solar energy. “This is particularly an area wherein our brotherly country can benefit from Moroccan knowhow in solar energy as Pakistan is also gifted with good summer season”, he said, adding that Pakistani business community can also take interest in Moroccan automobile sector which has been growing and most of the automobile products and spare parts were being exported to African countries which was rising at a pace of 10 percent every year.

He hoped that the existing relations and valuable trade will be enhanced more in the coming months in order to reinforce the bilateral relations between the two countries.

Earlier, President KCCI Tariq Yousuf, while welcoming the Moroccan Ambassador, stated that Pakistan views Morocco as an important partner which was the gateway to Africa and was an emerging market having free trade agreements with USA and Turkey. “In order to enhance and deepen connectivity between both countries, Pakistan’s Look Africa policy can help accelerate trade and strengthen economic ties which would pave way for Pakistan & Morocco’s businessmen to explore new dimensions for boosting bilateral trade.

He was of the view that Morocco was a potential market for Pakistani textiles and fabrics as it enjoys duty-free access from USA & EU. Both countries can exploit the available opportunities to boost trade and economic development.

“Both countries can exchange innovative ideas in the field of tourism to promote and develop tourism economy through joint ventures & exploring the economic opportunities”, he added.

He noted that as Moroccan economy has a well-established Tangier port with a handling capacity of 9 million containers a year, Pakistan can learn from Moroccan experience to develop Gwadar port, which is the gateway to regional economic transformation.