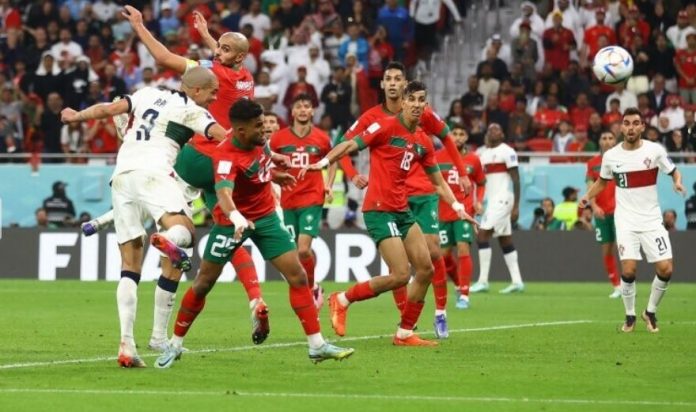 It was Yousseff En Neysri’s binocular vision that put Morocco within sight of the semi-finals and once they made sure of it, there was bedlam. The World Cup in Qatar had thrown up yet another stirring upset and in the first tournament to be held in the Arab world, Morocco’s 1-0 win over Portugal ensured that there will be an Arab-speaking team in its final four.

This was a win that would not only be celebrated across Morocco but also across the Arab countries, from Saudi Arabia to Algeria. It is also the first time that an African side has gone this far at the World Cup.

At the full-time whistle, the Moroccan players sank to the pitch, some in prostration, some just staring into the night sky in disbelief at a raucous Al Thumama Stadium on Saturday evening. This has already been a remarkable journey and it goes on. Walid Regragui’s side had put everything on the line here, chased every ball, attempted to cut every pass, and flew in with every tackle. They had seen their defensive lynchpin Romain Saiss stretchered off, but they continued to hassle Portugal into submission.

Down to 10 men in the closing stages, after Walid Cheddira was sent off, they repelled waves and waves of Portuguese attacks to hang onto their priceless lead and seal another famous victory to continue their journey in Qatar where France or England will come next.

All Moroccan players were heroes today but their biggest hero was En Neysri, whose 42nd-minute header, which he celebrated by making a gesture of putting on binoculars with his fingers, decided an absorbing, breathless quarter-final in his side’s favour.

As Morocco celebrated, the fact that their victory had come at the expense of Cristiano Ronaldo’s dream to win the World Cup title, in all likelihood his last tournament, was not lost on them. Some Moroccans immediately consoled him with a hug. But the goal by En Neysri was one that Portugal’s greatest ever player used to score for fun in his prime; towering over defences to flex his neck muscles and sending the ball in.

En Neysri’s goal had come after Morocco had stoically stood firm in the face of relentless pressure from the Portuguese, who were looking to carry on from where they had left against Switzerland in their previous game.

Yahya Attiyat Allah found the space to swing a cross into the box. En Neysri judged its flight, its trajectory and leapt high into the night sky to plant a perfect header. Ronaldo, once again on the bench with Goncalo Ramos starting at the apex of Portugal’s attack after his hat-trick against Switzerland, could only shake his head.

Age has caught up with the Portugal legend but he was summoned from the bench six minutes into the second half to find a reply to En Neysri’s goal; his only shot at goal being a snapshot late on that was saved by Yassine Bounou — Morocco’s star of their penalty shootout win over Spain in the last 16.

Portugal huffed and puffed but it was never enough. Overall, they had only three shots on target; Ramos heading wide was the most glorious chance they had to pull one back when he headed wide a centre from Bruno Fernandes.

Ronaldo’s career will end without the trophy that ensures eternal greatness. He was in tears. So were the Moroccans, but those were of unrestrained joy. This was their day and who knows what lies for them beyond this.

There was a predominant red hue in the evening sky, the colours of Portugal and Morocco; a precursor to the blood, sweat and tears that were about to be spilt on the pitch. Perhaps no one except the Moroccans had believed that they would be here, at this stage of the World Cup.

The last time Portugal made it this far was 16 years ago. Here they were in all white, a stripe of red and green across their chest, to provide a contrast to Morocco’s red and green. The expectation was rife; the Arabs united in their support in order to immerse in the racial pride it was going to bring if Morocco were to advance. Thousands of Moroccans had descended upon Qatar since their stunning victory over Spain in the last 16; from Casablanca, Rabat, Fes and Marrakech.

Hundreds of them were outside the venue as kickoff approached; a problem with FIFA’s ticketing app prevented them from entering the stadium. A notification from the ‘Hayya’ mobile application for fans flashed that the FIFA Fan Festival at Al Bidda Park was now packed to capacity. Such is the passion of the Moroccans and it showed inside the stadium too. They were loud, and even though there were hundreds of empty seats at kickoff, the noise being made was that of a full house.

It was a breathless start, fast-paced, end-to-end. Portugal, like in their 6-1 thumping of Switzerland in the last 16 went close in the fifth minute; Joao Felix, the man tasked to provide them with the attacking thrust with his gliding runs, seeing Bounou swat away his diving header. Morocco had been set up by Regragui to absorb the pressure and then hit on the counter; with Hakim Ziyech and Soufiane Boufal providing them with the width and speed to go through the flanks.

As Portugal tried to break through the centre, the imposing Sofyan Amrabat — fresh from snuffing out Spain’s midfield — was a stifling presence for them. Portugal coach Fernando Santos, with his ever-grumpy stare, prowled the touchline, thinking, and devising what needed to be done.

Just past the half-hour, Portugal saw Felix’s snapshot deflected onto the roof of the net. It was one of a few chances they would get in the first half; Morocco’s narrow banks of midfield and defence — as Santos had noted on the eve of the game — preventing Fernandes or Bernardo Silva from providing telling passes to Ramos.

Down on Morocco’s right, Ziyech was turning and twisting Portugal’s defenders but the cross that gave Morocco the lead came from the left. Attiyat Allah floating one which made Diogo Costa hesitate and En Neysri did the rest. Portugal almost levelled but Fernandes’ volley from an impossible angle wide on the right thundered off the bar. That was the closest they would come.