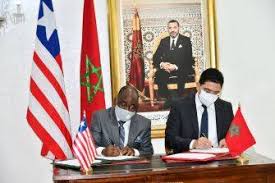 Rabat, (MoFA) – Morocco and the Republic of Liberia signed, Monday in Rabat, three cooperation agreements in the fields of higher education and scientific research, agriculture and health.

These agreements were signed by Minister of Foreign Affairs, African Cooperation and Moroccan Expatriates, Mr. Nasser Bourita and his Liberian counterpart Mr. Dee-Maxwell Saah Kemayah, who is on a working visit to the Kingdom.

The second agreement is a memorandum of understanding for cooperation meant to establish the general framework for cooperation in the agricultural field based on the sharing of experiences, technical assistance and capacity building.

The third agreement, which is a memorandum of understanding for cooperation in the health sector, lays down the framework for cooperation between the two countries in the health sector.It targets priority areas, namely maternal, child and neonatal health, epidemiological surveillance, in particular the establishment of an epidemic alert and response system, capacity building of human resources, medical coverage, and prevention and fight against non-communicable and communicable diseases.