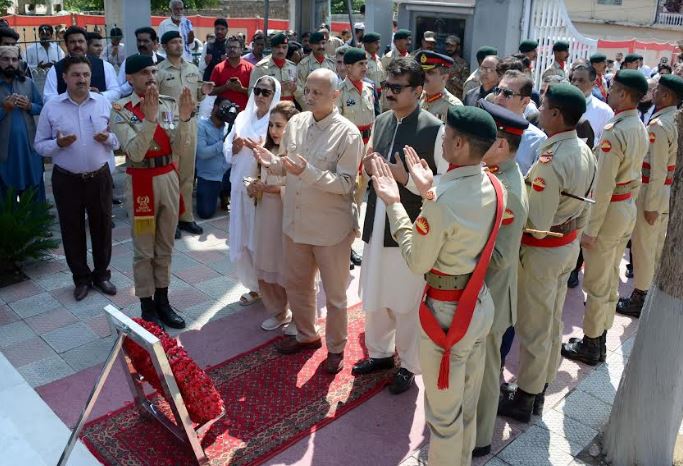 Senator Mushahid Hussain Sayed with other members marked the day with a visit to the mausoleum of Lance Naik Mehfooz Shaheed, Nishan-i-Haider, Pind Malkan, Islamabad. The Committee head along with other members of the Senate Defence committee paid homage to the courage and bravery of Lance Naik Mehfooz Shaheed NH. Senator Mushahid Hussain Sayed, Chairman of the Committee laid a floral wreath and offered Fateha at the mausoleum, and also met members of the martyr’s family.

Senator Mushahid Hussain, Chairman, Senate Defence committee while addressing a gathering at the mausoleum applauded the exemplary heroism of Shaheed and other brave sons of the soil who laid down their lives in Defence of the country. “We also salute the resilience and resolve of the mothers, fathers and families of our martyrs. The eternal sacrifices of the Pak Army for the homeland can never be forgotten. Pakistan army is a National Army and Pak Army is the guarantor of unity, territorial integrity, sovereignty and stability of the Motherland”, he remarked.

“The presence of representatives from all the provinces of Pakistan and all the political parties is a confirmation that the whole nation is united for national security above Party considerations”, he underlined. ‘If we are able to sleep peacefully today and live as free citizens of a free country, it is because of the Defenders of the Nation and supreme sacrifices of our brave soldiers”, he underscored. Senator Mushahid also lauded the Army role in flood relief, saving countless lives.

Leader of the Opposition in the Senate, Dr Shahzad Waseem and Senators Waleed Iqbal, Rukhsana Zuberi, and Zarqa Suharwardy also spoke on the occasion and commended the sacrifices of the Pakistan Army.

To pay rich tribute to the valiant martyr, Lance Naik Mehfooz Shaheed NH, who sacrificed his life for the motherland during the Indo-Pak War of 1971, Members of the Defence Committee later visited the family of Mehfooz shaheed. While talking to the family of shaheed, Mushahid Hussain Sayed stated that “Brave sons of the soil had thwarted the nefarious designs of enemy by sacrificing their lives for the nation. Sacrificing lives to protect the motherland was an honour of the nation and we salute his sacrifice and pay respect to his family , he added. A large crowd welcomed the Senators and shouted full-throated slogans of ‘Pakistan Zindabad and Pak Army Zindabad’.