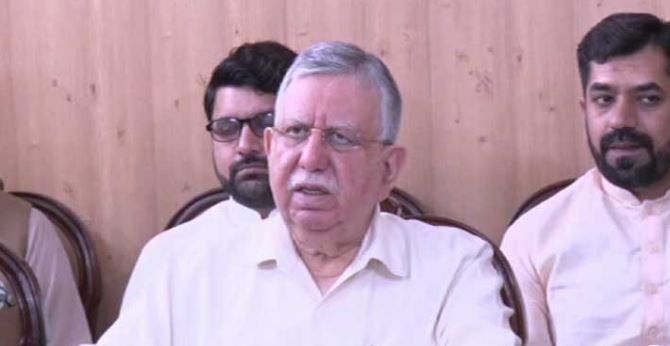 Addressing a press conference in Karachi, Tarin said, “it is a legal crime to tap someone s conversation that was leaked by tampering with our audio. We did not leak any audio. There was a fear that the IMF deal would be affected due to the audio leak, so why did they leak it, why was it leaked on the same day.”

Tarin claimed that the real problem would have arrived if the IMF had heard the tapes. “Although it wouldn’t have affected the programme because the surpluses from provinces are in the form of an MoU (memorandum of understanding).”

Elaborating on the matter, he said that the PTI’s aim behind writing the letter was to spend money on the provinces in the light of the floods. “So that we could go and tell them to give us relief the way they did during Covid.

“We believe in the well-being of the country,” the PTI leader said.

He recalled that in January, when the previous government was going to the global lender for the sixth review, it had faced massive criticism from the opposition.

“Their top leadership had said that the IMF agreement should be torn and called it an attack on our sovereignty. But we never called them traitors. Instead, we took it as political discourse.”

Expressing disappointment at the accusations of being a traitor, Tarin said that it was high time all the political parties, including the PTI, moved past it. In a democracy, you have the freedom to voice both agreement and dissent.

“We have a disaster in front of us and it calls for us to unite and fight it together,” he said, and advised the government to provide relief to the people in these testing times.
“Don’t waste your time on giving certificates of traitors. We want to work on this together,” Tarin added.