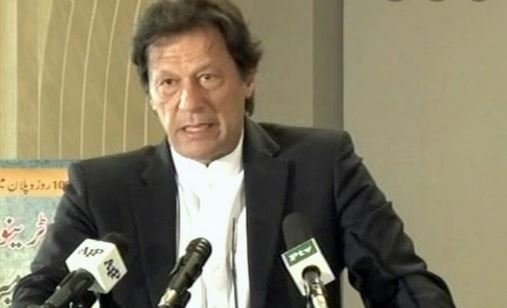 Accuses rulers of using ‘mafia tactics’ to save corruption

ISLAMABAD: /DNA/ – Coming down hard on the current government, Pakistan Tehreek-e-Insaf (PTI) Chairman Imran Khan raised expressed surprise over the sudden and mysterious deaths of witnesses and investigators linked to the corruption cases of Prime Minister Shehbaz Sharif and his family members.Imran Khan on Friday shared details of the witnesses and investigators who died suddenly during the last few weeks since the imported government was imposed through the US-backed conspiracy.He termed it an attempt by Prime Minister Shehbaz Sharif and his associates ‘brought in through US regime change conspiracy’ to use mafia tactics to save their corruption and money laundering.Imran Khan said that the six important witnesses and investigators part of the cases against Shehbaz and his family have died mysteriously so far.These people were: Gulzar Ahmed, Muzammil Raja, Ghulam Shabbir, Maqsood Chaprasi, Dr Rizwan and Imran Raza.He said that death cause of Gulzar Ahmed, who was peon at RSML and benami account operated in his name even posthumous, could not be ascertained so far, while the other suffered heart attacks.The PTI Chairman said that Nadeem Akhtar, another investigator in the money laundering case of Sharifs suffered a heart attack but he survived. He said that Muzammil Raja was Sharif’s servant and duty bound to draw money and hand over to Maqsood Peon and suffered heart attack. Similarly, Ghulam Shabbir was also a benami account holder of Sharifs and brother of Muzammil Raja died due to heart attack.Imran Khan said that Maqsood was the front man and benami account holder of Sharifs and caused of his death was reportedly heart attack. Dr Rizwan was investigating the money laundering case against Sharif was also died of heart attack.Imrna Khan stated that Imran Raza was investigating Rana Sanaullah’s case and committed suicide.