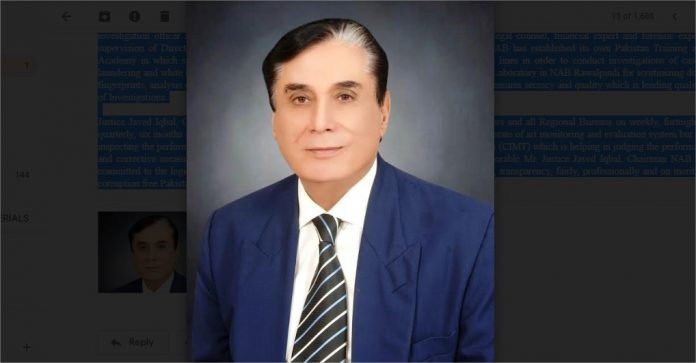 Islamabad, July 12,: The Honorable Mr. Justice Javed Iqbal Iqbal, Chairman NAB after assumption of his responsibilities as Chairman NAB not only devised an effective and proactive National Anti Corruption Strategy to check corruption but took necessary measures in order to nab corrupt elements.

Owing to outstanding performance of NAB, reputed national and International organizations like Transparency International Pakistan, World Economic Forum, PILDAT and Mishal Pakistan have appreciated NAB’s performance with 68.8 percent cumulative success ratio in 2019. According to a survey of Gillani and Gallop Pakistan 59 people of Pakistan showed confidence upon NAB.

It is an honor for Pakistan that Country’s apex Anti-Corruption Organization NAB is a role model not only for Pakistan but also for entire SAARC countries as NAB is Chairman of SAARC Anti Corruption Forum which is the great achievement of Pakistan due to NAB’s efforts.

Pakistan is the only country to whom China has signed a memorandum of understanding (MoU) for eradication of corruption. Pakistan and China are now jointly working for ensuring transparency in China Pakistan economic coordination CPEC projects.

NAB is the only anti corruption organization in Pakistan which is playing a vital role in recovering looted money from criminal elements and has recovered Rs. 466.069 billion since its inception. The recovery made by NAB possible to return to hundreds of affectees and some government departments/private persons and all recovered amounts deposited in national exchequer which reflects excellent performance of NAB.

NAB is committed to provide training to its investigation officers on modern lines. In line with the vision of Chairman NAB, NAB has introduced a new concept of combined investigation Team (CIT) in order to further improve the quality and standard of its inquiries and investigations.

THE CIT comprises one senior investigation officer and one junior Investigation officer, Additional Director as case officer, legal counsel, financial expert and forensic expert under the supervision of Director and Director General concerned to benefit from collective wisdom. NAB has established its own Pakistan Training and Research Academy in which specialized training has started to impart investigation officers on modern lines in order to conduct investigations of cases of money laundering and white collar crime cases besides establishment of state of the art Forensic Science Laboratory in NAB Rawalpindi for scrutinizing documents and fingerprints, analysis of digital data etc.  The Forensic LAB of NAB not only saves time but also ensures secrecy and quality which is lending quality in conduct of Investigations.

Justice Javed Iqbal, Chairman NAB is regularly reviewing the performance of NAB Headquarters and all Regional Bureaus on weekly, fortnightly, monthly, quarterly, six months and annual performance not only through computer based specially devised state of art monitoring and evaluation system but also physical inspecting the performance of all concerned by Chairman NAB’s Inspection and Monitoring Team (CIMT) which is helping in judging the performance of NAB and corrective measures are then taken as per law. NAB under the dynamic leadership of Honorable Mr. Justice Javed Iqbal, Chairman NAB is absolutely committed to the logical conclusion of mega corruption white collar crime cases with hard work, transparency, fairly, professionally and on merit for a 100 % corruption free Pakistan.