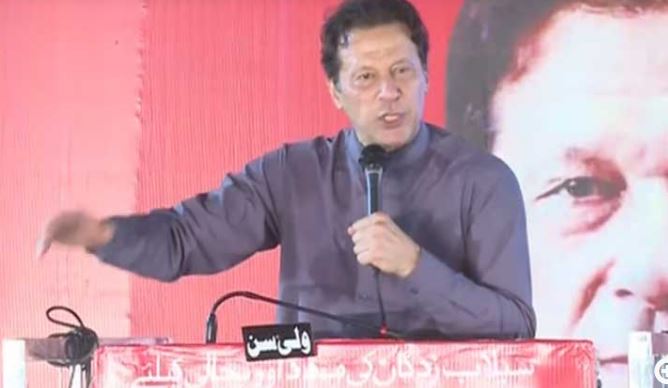 GUJRANWALA – Pakistan Tehreek-e-Insaf (PTI) supremo and former Prime Minister Imran Khan on Saturday said that the nation will hold the establishment responsible if the country’s economy continues to decline.

Addressing a public rally in Gujranwala, the former PM said that the Secretary General of the United Nations (UNSG) has come to visit the flood-affected areas, and Shehbaz Sharif assured him that he would spend money honestly while the majority of his federal cabinet members are on bail. They keep money outside the country and beg from others, Imran added.

“80,000 Pakistanis were sacrified in American war which was imposed on us. Such rulers bow before foreign countries, and they will do whatever orders they get from outside. That is why Pakistan is independent in its decision ,” the former PM said.

While reacting to the contempt of court case, Imran Khan said Shahbaz Gill was not a terrorist but he was treated and tortured like a terrorist that is why he reacted.

“The court of Chief Justice Athar Minallah has made very good decisions, I will accept whatever decision the court makes,” the PTI chairman said.

“The imported government is rapidly taking the country down, I know you are neutral, but if the country’s economy continues to decline like this, the nation will hold you responsible. If nothing is done, the economy will be destroyed, and the national security will be directly affected if this happens,” Imran said.

The PTI chairman addressed his party’s Insaf Student Federation (ISF) and the youth in general, and said he would need them both in the light of “things I am going to say ahead”.

“The thing I am preparing this nation for … I would need the youth of this nation a lot for Haqeeqi Azadi (actual freedom),” he said.