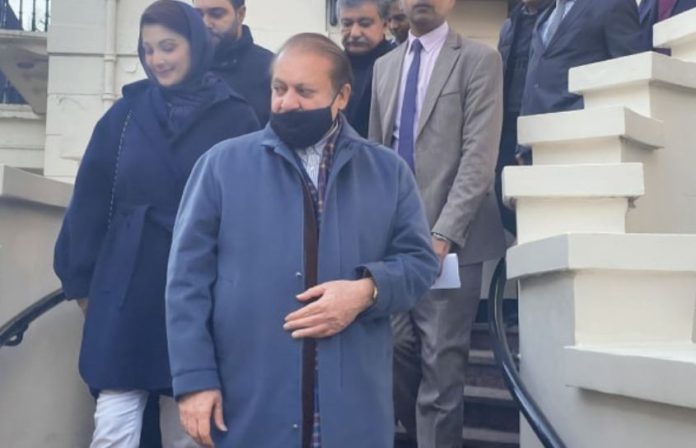 LONDON: Breaking his silence for the first time after his party faced a major political blow in Punjab following Parvez Elahi’s victory in a vote of confidence shortly before the dissolution of the provincial assembly, PML-N supreme leader Nawaz Sharif said “a cruel joke had been played on Pakistan… for the sake of personal gains”.

Speaking to reporters after meeting with a delegation of senior PML-N leaders from Pakistan, he said: “We all discussed the situation in Pakistan. Pakistan will come out of this difficult situation and we will be the ones to take the country out of it.”

When asked if he held former army chief retired Gen Qamar Javed Bajwa and former spymaster Gen Faiz Hamid responsible for the state of the country, he said: “The reality is before everyone. Now no name or face is hidden. Pakistan was used for personal gain. It was a cruel joke played on the nation. “In my Gujranwala jalsa, I stated who was responsible and everything was out in the open. It is my responsibility to tell the nation about the wrongs committed against the people, and it is my responsibility to make things right.”

At the time, he also questioned who was responsible for the “two governments” in the country, and went on to blame then army chief Gen Bajwa and then ISI chief Faiz Hamid as being behind everything.

His remarks came in the wake of a top-level huddle where he and his daughter, Maryam Nawaz, met with party leaders to discuss strategy as the possibility of polls in two provinces grows.

The meeting took place amidst heightened political activity back home, with the dissolution of both the Punjab and Khyber Pakhtunkhwa Assemblies and the imminent return of Ms Nawaz to Pakistan.

PML-N leaders Rana Sanaullah, Pervaiz Rashid and Javed Latif were also present at the meeting held at Stanhope House on Thursday, where along with the ongoing political situation, Ms Nawaz’s return to Pakistan and the party’s election campaign prospects were discussed in the four-hour huddle.

Although it was being speculated that Mr Sanaullah — who was charged with overseeing trust vote proceedings in the Punjab Assembly — had been summoned to London to explain the party’s defeat, a source privy to the discussion rubbished reports that the senior Sharif was annoyed with the interior minister.

“The meeting took place in a very good atmosphere. Mian sb told Rana sb ‘we have been waiting for your arrival for four days’. He [MNS] also said in the last few days homework has been done and it will be presented to you [Sana]. Mian sb said as president Punjab, Rana sb’s recommendations are key and the party will act on them,” the source said.

The source claimed the meeting was called to discuss the return of Ms Nawaz and her role as chief organiser. “Rana sb’s opinion on that programme and implementation to mobilise the party was critical to Ms Nawaz’s return.”

When pressed on the party’s defeat in the vote of confidence at the Punjab Assembly, Mr Sanaullah attributed it to the “doublespeak” of CM Elahi, who had earlier said he wouldn’t take a vote of confidence or dissolve the assembly.

“We had the numbers and we will show we have the numbers. The coming elections will show PML-N strength and victory,” he told reporters outside the PML-N’s London headquarters.

He said there will be more meetings in the coming days, and that the party’s election campaign will be kicked off according to the guidance given by their leader. He confirmed Ms Nawaz will return next week.

When asked about the return of the senior Sharif, Rana Sana said, “It is understood MNS will return, and he will lead the party’s election campaign. The legal formalities regarding his return were also discussed.

“MNS return is critical as he is the leader of the party, he has the vote and support of the people.”

The interior minister also rubbished reports of rifts between former PM Shahid Khaqan Abbasi and the PML-N leadership. “There are no differences and Mr Abbasi is committed to the party.”