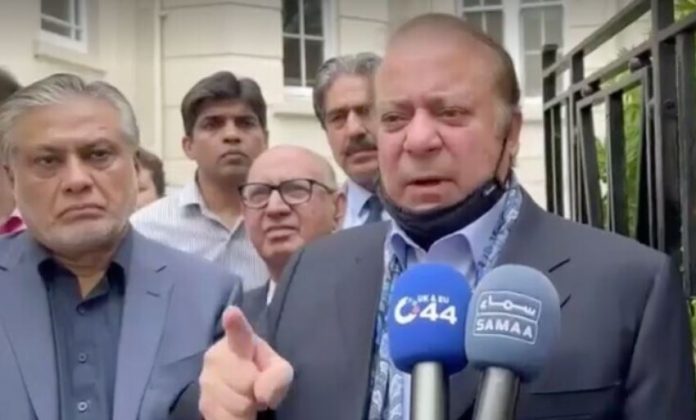 “It has been proven today […] and the entire nation knows now that Imran Khan is the biggest thief in [the country’s] history,” he alleged.

Earlier today, the ECP, in its verdict, ruled that the PTI had did indeed receive prohibited funds.

The ECP said the party had only owned eight accounts before the commission and declared 13 accounts to be unknown.

In its order, the commission also said that it was “constrained to hold that Imran Khan failed to discharge his obligations as mandated under the Pakistani statutes.”

Talking to reporters outside his residence in London today, Nawaz said that Imran used to give “lectures” to people about honesty. “Today, the ECP’s verdict has shown that it is actually him who is the biggest thief in history.

“He knew that he had committed the biggest money laundering. This is the reason he kept demanding the chief election commissioner’s resignation,” he said.

“The way Imran took money from foreign nationals proves that he was the person who brought foreign agenda into the country,” Nawaz claimed.

He recalled that the PML-N had been leading the country towards progress, regretting that all the efforts went in vain because of Imran’s actions. “He has ruined the economy and broken our backs.

“And he did all this for a foreign agenda,” the PML-N leader said, demanding that people such as former justice Saqib Nisar — who termed Imran sadiq and ameen and initiated proceedings in the National Accountability Bureau (NAB) against the PML-N — should also be punished.

“All these things are present on the record. And there will be a time where all these questions will need to be answered.”

Nawaz reiterated that these people, along with Imran, were responsible for bringing Pakistan to the point where it was today and urged all the political parties to take action against them.

“This man Imran is extremely dangerous for Pakistan,” he stated, adding that he should be punished as soon as possible.